This Donut Tree is so much fun to eat, make and display! Learn how to make a donut cake tower in this post, including step-by-step pictures.

Making a Donut Tree is easy and lots of fun

Hi! My name is Jonathan (AKA Tina's partner AKA the lucky guy who eats of all the food that appears on The Worktop AKA @jonajooey).

I'm going to be guest blogging about a fun lil' creation I helped make with my toddler.

(And yes, I needed a lot of coffee that morning before we started.)

We were craving donut holes so made a donut hole tree!

I'm not quite sure how we got here. I'm not typically the crafty type, or the one to spend much time in the kitchen.

But between a recent donut craving, trying to come up with a fun DIY project to do with my kid, and mama working on a Hosting a Baby Shower Brunch post (to be shared soon!), it led to me and BB making a Donut Tree together.

And let me tell you, it was so much fun (and easy!) I think we are going to make a donut tree again.

My thought is that we will be making donut birthday cakes going forward. And come the holidays, a donut Christmas tree will replace our Gingerbread house traditions.

Why I loved making this donut cake tower

A Donut Cake Tower has got a few things going for it:

How to make a donut cake tower

It takes 5 simple steps to make your donut cake tower. Step by step instructions and pictures follow, but here's the quick rundown:

Step one: Find a good styrofoam cone for the base of the donut tree

The hardest part of this entire project is deciding on the perfect styrofoam to serve as the base for your donut hole tree. Depending on how many donuts you want to serve/eat, you can size the styrofoam accordingly.

How many donut holes do you need to make a tree?

I wasn't sure how many donut holes we would need, so I ended up buying 60 of them. But our 9.8-inch / 25 cm styrofoam could only fit 48 comfortably. Don't get me wrong though, I'm not complaining about the extra leftover donuts.

To be honest, it took us about a day and half to eat this donut cake tower. Is that too gluttonous?

Then, wrap the entire styrofoam cone in foil.

We do this because you can never be sure whether the styrofoam is food safe. You also prevent little specks of styrofoam from getting on the donuts.

As a bonus, I have never met a toddler who doesn't find it fun to "wrap" something.

Step three: Use a bit of icing to "glue" the base of the styrofoam cone to a plate

Just to be on the safe side, we used a bit of simple icing to make sure the styrofoam tree base stays in place on the plate.

Even for someone as challenged at cooking as I am, this was easy: Just add powdered sugar plus a tiny bit of water into a bowl and mix it so it's like a glue.

You'll also want to use this simple icing in the next step, which involves rainbow rice!

Then the fun part. Break out the donuts and start making your donut hole tree!

To do this, you'll need one bowl of simple icing and one bowl filled with lots of rainbow rice (aka sprinkles).

After that, simply dip a few of the munchkins in the icing, then dip it in the sprinkles. Let it dry.

TIP: The next time I make a donut hole tree, I actually would do this step first so the sprinkled donuts have a chance to dry and are ready to go when you're putting the donuts on the tree.

You next stick the donut holes to the styrofoam base using toothpicks. It's as straightforward as it sounds.

Start from the bottom and work your way up. But, some finesse is helpful. So here are a few tips I can share.

It is easier to construct this donut hole tree with longer toothpicks at hand. With longer skewers, you can insert them further into the styrofoam cone for a sturdier hold on the donut holes.

Longer toothpicks also let you break or cut them into varying lengths more easily. I'll explain why this is important in the next tip.

We used 4-inch bamboo skewers and they held up the donut holes perfectly.

Break toothpicks to the necessary lengths

With the toothpicks, I found it helpful to break them into varying lengths depending on how high up the styrofoam base I was.

By the time you get to the top, the toothpick will poke out of the other side. Additionally, you're going to have so many toothpicks in that thing you might end up hitting another toothpick.

At the same time, don't break the toothpicks too short otherwise it'll be tricky to stab into the styrofoam.

Trying to do it other way might result in some sad mangled donut holes!

Carefully space the donut holes on the tree

The donut hole cake looks a whole lot better without gaps, so there is some art to the donut placement.

You'll want to do your best to give each donut room to breathe, but also squash them comfortably against each other.

As you work your way up the styrofoam, you'll notice that each donut "sits" on top in between the two donuts below it. It does get squashy at the top though, so just try your best.

Fill any large gaps in your donut hole tree with decorations

If you have large gaps in your donut hole tree, fill them up with decorations! That way, no one will be able to tell.

We used these super cute 2-inch honeycomb balls inserted into the long toothpicks. 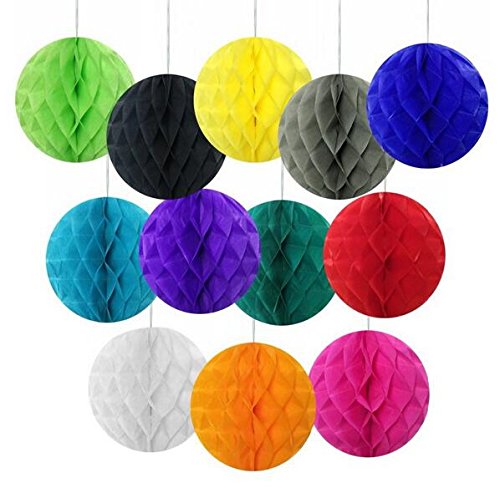 You can also buy cupcake toppers or other cake decorations to insert into any gaps.

Tips for making a donut tree with a kid

I had a lot of fun making this donut tree with BB. You'll figure out pretty quickly what your toddler can and cannot help with.

I found the following actions were easy enough for him to do on his own:

If a good-looking donut tree is a concern, then make sure you help guide your toddler to using the "pretty" side of the donut. You'll notice on the donut holes where the glazing ends or where the dough was cut off. Those are the spots that you want on the inside of the tree.

Grab the tools you need to make this donut cake tower 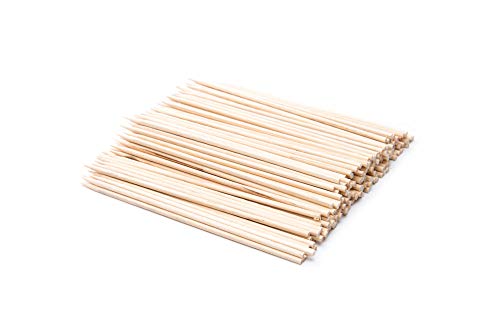 Now it's time for me to go make another coffee. Happy eating to everyone! To keep browsing around The Worktop, don't miss these toddler friendly breakfast ideas. 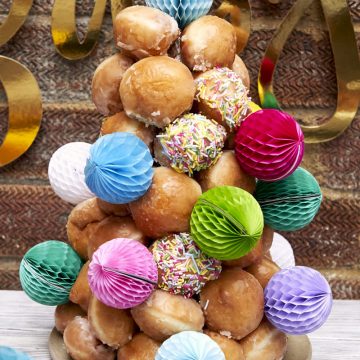 5 from 5 votes
Print Recipe Save RecipeSaved!
Serves: 12
Prep: 20 mins
Cook: 0 mins
This Donut Tree is so much fun to eat, make and display! Learn how to make a donut cake tower in this post, including step-by-step pictures.

I used 48 Krispy Kreme Donut Bites for my 9.8 inch / 25 cm styrofoam cone. Donut holes vary in sizes, so plan accordingly. For smaller supermarket donut holes (and possibly even Dunkin' Donut munchkins), I would suggest purchasing at least 5-6 dozen. I purchased 6 dozen, and ended up with 2 dozen extra. And we ate all the extra donut holes - no problem!  These are the super cute mini honeycomb balls. They are 2'' in diameter.
Course: Breakfast, Brunch
Cuisine: American
Keyword: Donut Cake Tower, Donut Tree
Special Diet: Vegetarian
Author: The Worktop
Cal : 173kcal
Note: Nutrition information is a rough estimate.
Love this?I would appreciate a star review! Snap a picture and share it with me on Instagram using #theworktop and tagging me @theworktop.
« Easy Homemade Buttermilk Pancakes
Croissant Breakfast Casserole »