You'll love this vegan bulletproof coffee which tastes better than the real thing! This keto bullet coffee recipe uses coconut oil, cacao butter, and almond butter for a rich and creamy drink. It only takes a few minutes to make this homemade bulletproof coffee. 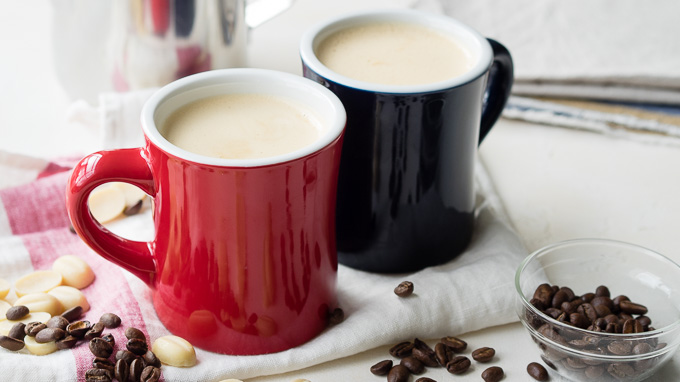 This vegan bulletproof coffee tastes better than the original thing

While traditional bulletproof coffee is made by combining coffee, grass-fed butter, and MCT oil, this recipe is a vegan version. And I have to tell you, it tastes so much better than the original thing.

I've developed this recipe so it doesn't use any butter. Instead, I've replaced it with an ingredient that is tastier, creamier and richer: organic raw cacao butter.

Cacao butter is the the pure fat fat that is pressed out of cacao beans. It's the base ingredient used in white chocolate, and has the flavor and aroma of cocoa. It can be called cocoa butter or cacao butter, though often manufacturers use the term cacao butter to mean that it's raw and unprocessed (as opposed to cocoa butter, which might be processed).

If you can, use an organic and raw cacao butter. You can probably buy it at your local health store, but the easiest way is to get one like this one on Amazon. 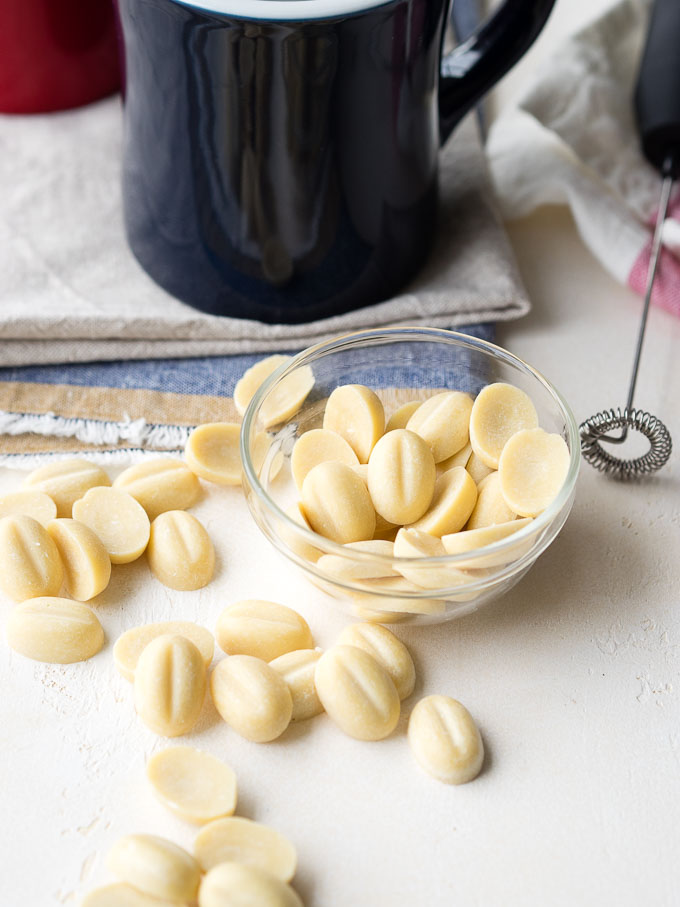 This is also a bulletproof coffee with coconut oil

But before you just go dollop coconut oil in your coffee, there's a specific way to add coconut oil to your coffee -- described below, with a milk frother wand. Coconut oil naturally separates from coffee, so it's incredibly difficult to use a spoon and stir coconut oil into coffee in a way where you aren't left with an oily layer on top of your coffee.

Lastly, I add almond butter in this vegan bulletproof coffee

Along with cacao butter and coconut oil, I add a spoonful of almond butter. I find that almond butter gives this vegan bulletproof coffee a bit of thickness and texture, as well as vitamin E, magnesium, fat and fiber. 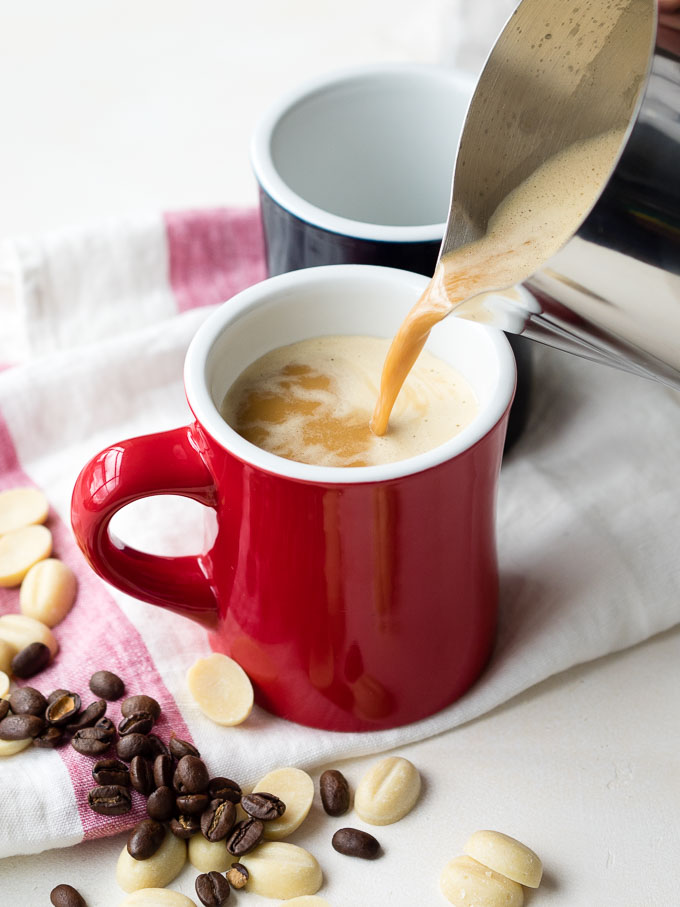 How to make Homemade Bulletproof Coffee

So now that you are convinced that you should try this recipe, let's get into the nitty gritty of the post: how do you make vegan bulletproof coffee at home? It's easy!

The full recipe is below, but to make homemade bulletproof coffee, simply heat the cacao butter, coconut oil, almond butter and oat milk in the microwave until everything is melted.

Add in the coffee, and whizz it with a milk frother wand until your vegan bullet coffee becomes rich and creamy. Serve and drink it immediately.

Do I need a milk frother wand to make bulletproof coffee?

The best way to make bulletproof coffee at home is to use a milk frother wand. Don't have one? You can use a blender to get away with it as well. 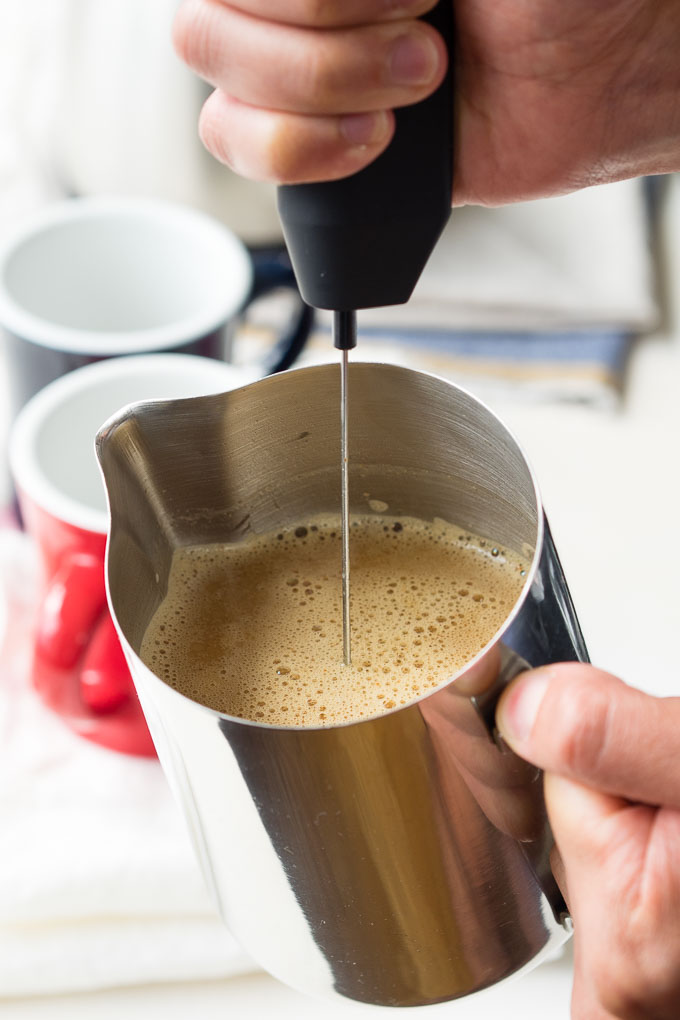 But the milk frother wand gives you so much more control when making the coffee. And you won't end up with a bulletproof coffee that is too frothy, or too aerated.

So if you plan on making bulletproof coffee at least a few times a month, I would definitely recommend buying one. They are so small they will easily fit in your utensil drawer. Or you can buy one that has a stand.

Whatever you do, don't try to make bulletproof coffee by just stirring the ingredients together with a spoon. Oils and fats will naturally rise to the top.

So if you don't properly whizz it together with the milk frother wand, or the blender, then you end up with a mug of coffee topped with a layer of oil. You want your bulletproof coffee to look like how it does in the photo below. Nice, creamy and frothy on top. 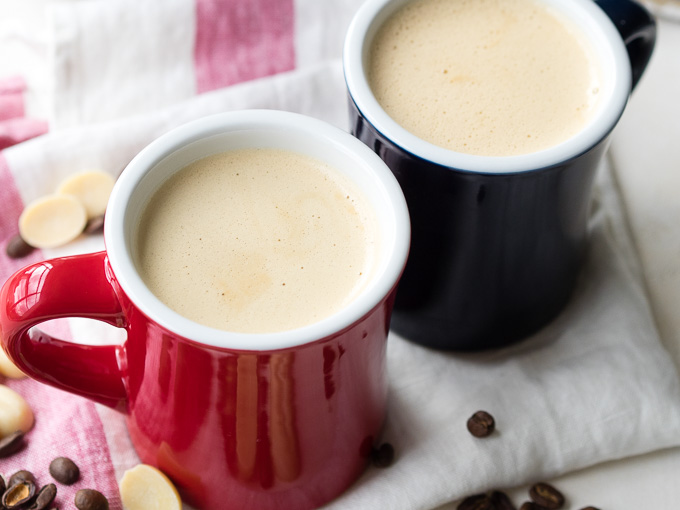 Of course we all get energy from caffeine. But with bulletproof coffee, I avoid the jitters that sometimes follows having caffeine on an empty stomach in the morning. This is especially true if I'm on the go and don't have time for a full breakfast.

If you google long enough, you'll find posts about the negatives of drinking bulletproof coffee. Mainly, that it's packed with unhealthy amounts of saturated fat, and if you drink it as a meal replacement, you are losing out on other valuable nutrients and minerals you would get from a proper breakfast.

I always advocate for a wholesome breakfast. But this vegan bulletproof coffee is a miracle for those go-go-go days. I pop it into my travel mug and off I skip.

But you should always talk to a nutritionist if you are making a big change in your diet, such as having bulletproof coffee on a daily basis or switching to the keto diet. 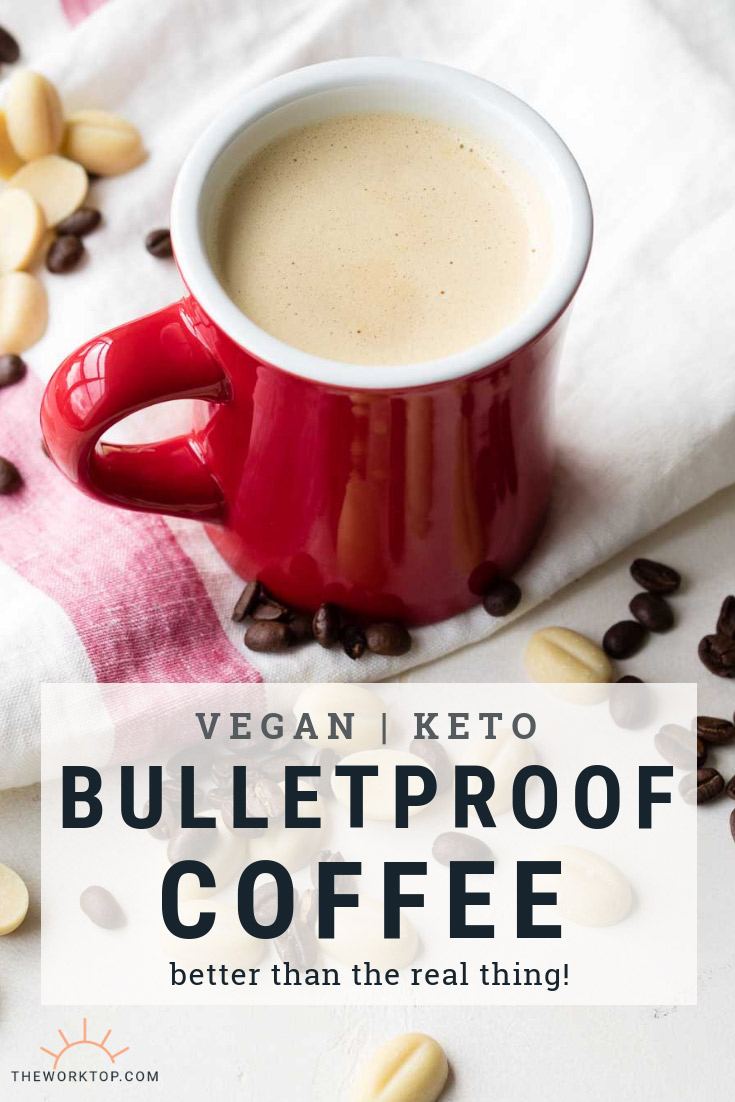 Not only is this recipe vegan, it is also a keto bulletproof coffee recipe 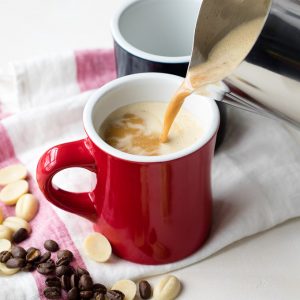 Since cocoa butter is sold differently and vary in size, if you don't have a scale, envision it being 2 tablespoons when melted.
Course: Drinks
Cuisine: American
Keyword: Vegan Bulletproof Coffee
Special Diet: Dairy Free, Gluten Free, Vegan, Vegetarian
Author: The Worktop
Cal : 361kcal
Note: Nutrition information is a rough estimate.
Love this?I would appreciate a star review! Snap a picture and share it with me on Instagram using #theworktop and tagging me @theworktop. 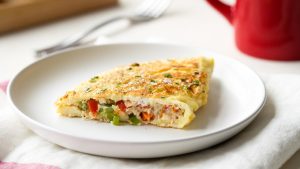