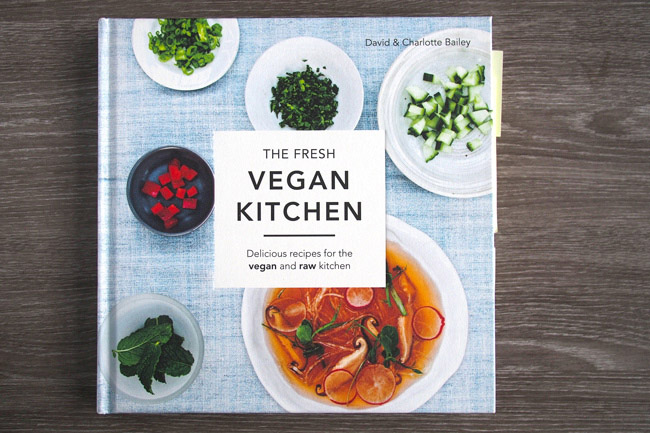 The Fresh Vegan Kitchen: Delicious Recipes for the Vegan and Raw Kitchen

(UK version) by David and Charlotte Bailey. (Enter to win a copy below.)

This is a cookbook that will inspire you to make new and exciting recipes with ingredients you’ve probably never used before. As the name implies, all of the recipes in The Fresh Vegan Kitchen are vegan. Many of the recipes are even suitable for a raw diet. But the book isn’t necessarily about a vegan or raw diet, and what’s missing from a plant-based diet. Instead, I loved this cookbook because every recipe in it is well-thought-out and prepared with a lot of care and attention. By the time I got to the end of The Fresh Vegan Kitchen, I had forgotten it was a vegan cookbook.

Whether you follow a vegan diet or not, this is a really interesting cookbook that will help you add new recipes to your cooking repertoire, and teach you new skills in the kitchen. And even if you aren’t looking to expand your cooking horizon, it’s a great read just to see the broad range of foods in a vegan diet. And even if you just leave it on the coffee table (thought I doubt you will after reading it), it will be a great conversation starter because owning a vegan cookbook written by a couple that sells Buddha Bowls from a food truck is really hip. 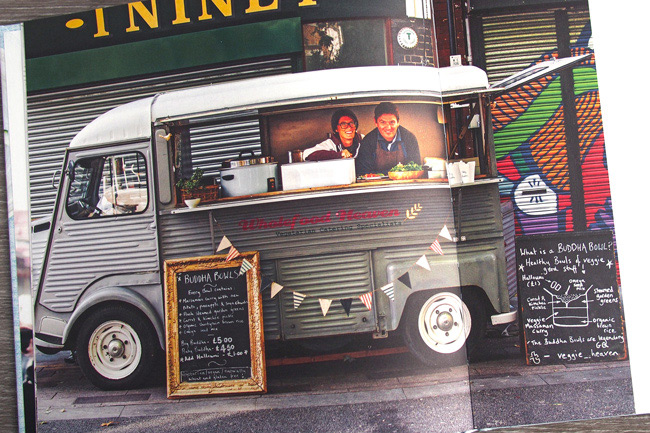 FULL DISCLOSURE: I am a die-hard Buddha Bowl fan, and I am often found waiting in the queue in front of David and Charlottes’ food truck. I didn’t make the Buddha Bowl recipe from the cookbook before writing this review, because if I did, I probably would have just end up raving about it, and only it.

There is an index in the back which makes it easy to find recipes based on ingredients. Recipes are given in both metric and imperial measurements.

Cooking from The Fresh Vegan Kitchen

Cooking from The Fresh Vegan Kitchen is so much fun. David and Charlotte are such lovely people, and you can hear their cheery voices in their writing. It’s like chatting with old friends over the kitchen table, but when you leave the conversation (ie. reach the end of the book), you realize that you have learned so much. You’ll learn about new cooking techniques (or should I say, non-cooking “raw” techniques), unconventional ingredients to try, and creative ways to use vegetables. If you don’t follow a vegan diet (like me), don’t worry, they don’t try to convert anyone to a vegan diet. But instead, they just talk about the food they make in such a delicious manner and caring manner. 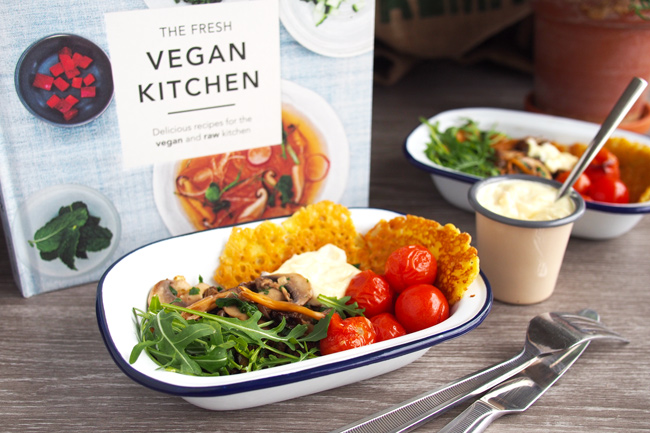 While I loved everything I learned from the book, this wasn’t the easiest cookbook to cook out of. Many of the recipes are new and foreign to me, or require ingredients that I am not familiar with. While I was a bit nervous about it at first, the fact that there are so many new recipes and ingredients in it ended up being my favorite aspect of the cookbook. It really made me want to cook outside my comfort zone and try new dishes.

I read the cookbook cover to cover because I just kept wanting read the next recipe. Halfway through, I realized that there were too many recipes I wanted to make and I wouldn’t remember them all. So I got out my post-it tabs, and started over from the beginning again, this time marking the recipes (you can see some tabs peeping out in the photo above). I was still flagging when I got to the last recipe — which I flagged too, of course. Maybe this is just the lawyer coming back out in me, but I have never been so excited flagging things before.

The recipes in The Fresh Vegan Kitchen are inspired by global cuisines. When I spoke to David and Charlotte, they mentioned that they spent a large chuck of the time writing this book in the Philippines. You can see definitely see the Asian influences – Chilled Cucumber and Wasabi Soup, Bahn Mi Chay, and Raw Futomaki just to name a few. But there’s so much more than eastern flavors. For example, you can also find recipes for Acai Bowl, Mexican Pate and Watermelon Gazpacho.

Some recipes are very straightforward, but David and Charlotte also are not shy about including recipes that have many components. I made the Farinata (Italian pancakes made with chickpea flour and olive oil), which required multiple steps and components. You have to make the pancake part (fried on the stove), the filling part (chopped mushrooms and herbs sautéed on the stove), the aioli (roasted garlic in the oven), and the side of roasted tomatoes (again in the oven). By the time I finished all these steps, I was famished. But I managed to snap a few pictures before I dug in. You can find more photos and the recipe for the Farinata here.

There is an incredibly great section in the book that includes recipes for many basic ingredients. In that section, you can learn how to sprout grains, make raw dressings, vegan dipping sauces, various soup stocks, and a handful of different types of curry paste. This is one section I’ll definitely be referring to regularly. 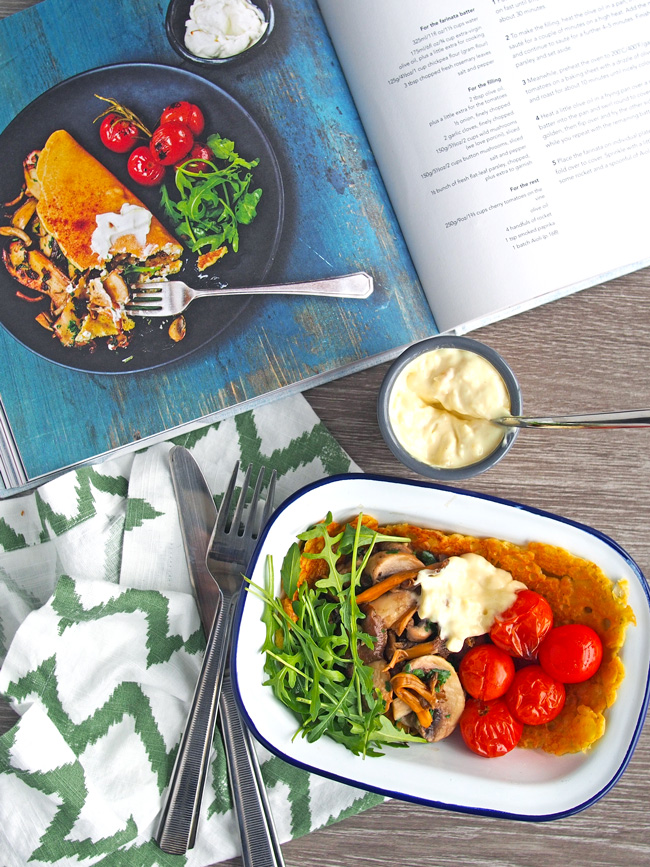 I loved that the cookbook had so many new recipes and ingredients I was not familiar with. But some of the recipes do not include pictures, and I was nervous attempting them. For example, I’ve never used tempeh (a soy based product) or seitan (wheat gluten) before, and have never rolled together a Futomaki Roll. While the directions for those recipes are very clear, a picture of the final dish to show what I was making might have eased some of my concerns about whether I was doing it “right”. But I’m also sure David and Charlotte would have been happy however you put the dish together, and there probably is no “right” way to do it.

While you should be able to find most of the ingredients in any large city, you might not have all of the ingredients sitting in your kitchen already. Some of the ingredients that I didn’t have on hand included nutritional yeast, probiotic powder, egg-replacer powder, and kecap manis (I had to google this one. It is a thick, sweet, rich, syrupy Indonesian version of soy sauce containing sugar and spices.). All that just means that there are a few recipes that you probably can’t make on the spur of the moment, without going to the grocery store.

The Fresh Vegan Kitchen is definitely a cookbook that will open your eyes to new dishes and ingredients. Even though I don’t follow a vegan diet, I didn’t feel like any of the recipes were missing or lacking any ingredients. I can’t wait to try the other recipes in the book and make my own Kombucha! There are a lot of post-it flags for me to make my way through.

Win a copy of The Fresh Vegan Kitchen Cookbook

I loved this book so much that I spoke to the publisher about it, and Pavilion Books has kindly provided 4 copies of The Fresh Vegan Kitchen Cookbook to be won by 4 lucky winners. I will ship it to you wherever you live (worldwide). The winner will be selected at random from all correct entries received; entries will be verified. Get one entry for each of the actions below! Good luck!

This cookbook was kindly provided by Pavilion Books for me to review. 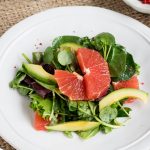 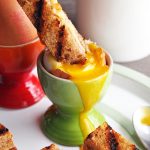 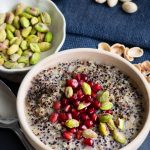 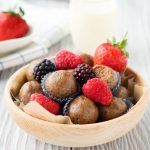 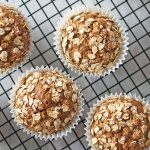 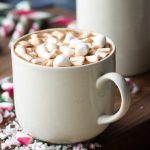