Murmura Spicy Puffed Rice (borugulu) is a great mid-morning snack. It has just enough spice to make it interesting, and packed with nuts to give you energy. 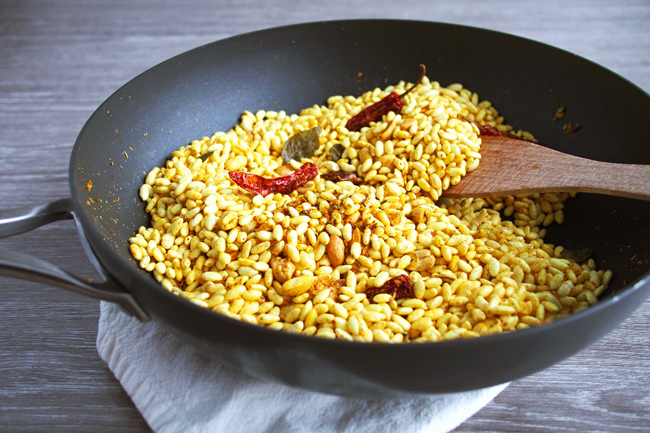 Murmura Spicy Puffed Rice (borugulu) never struck me as a breakfast food until I made it and loved starting my day eating it. Once I gave it some thought, I've decided that it's actually just a variation on eating cereal for breakfast.

No milk added, but puffed rice lightly pan fried with a lot of spices and nuts. And though I do love a sweet breakfast, here's a healthy no sugar recipe to start the day (to even out with the pancake ice cream sandwiches posted yesterday). 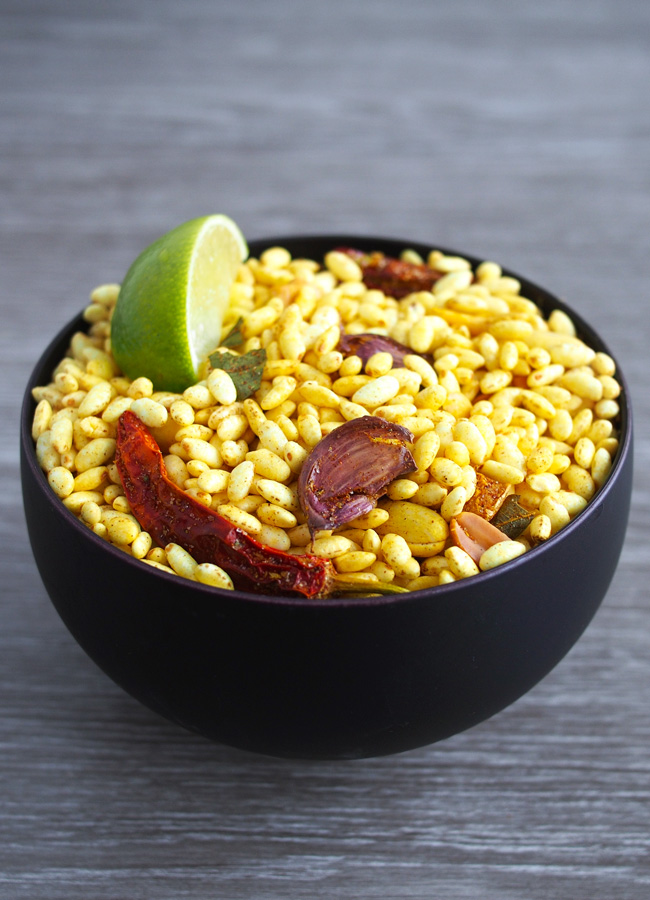 This recipe for Murmura Spicy Puffed Rice is inspired by Indian street food. Murmura (borugulu) simply means puffed rice, and there are a million ways to cook and eat puffed rice.

Inspired by street food, you can enjoy this puffed rice snack any time of the day 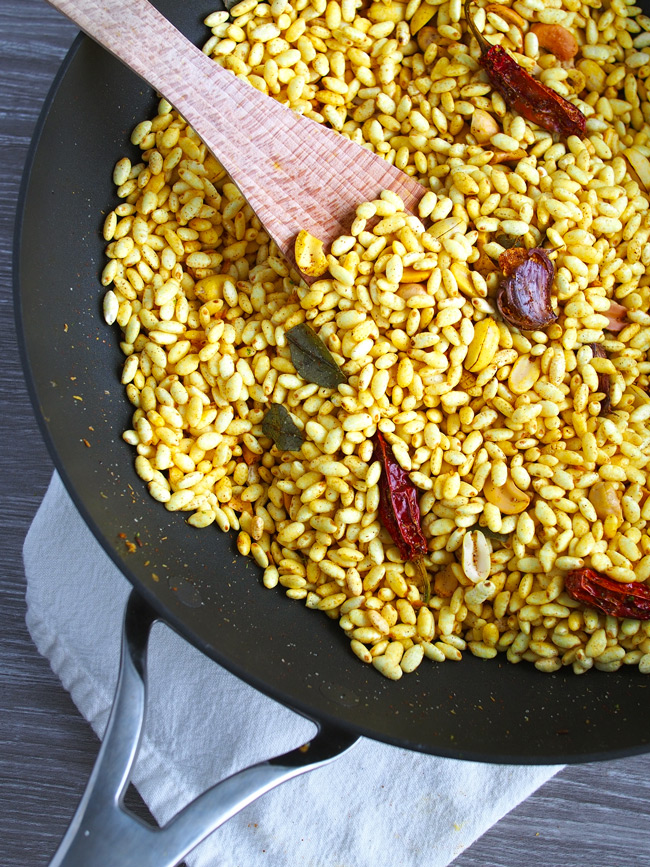 Puffed rice is also common in many other different cuisine and cultures. In Taiwan, there's a popular street food puffed rice snack called bao mi xiang. You can see it being made in this video - Making Mi Xiang. It's a 10 minute long video and the quality is not great, but at 2:30, you can watch the "bang" as the pressure that causes the rice to "pop" gets released.

You can find puffed rice in many international grocery stores

I've also seen puffed rice snacks in Korean and Japanese grocery stores, and Filipinos also have something similar called ampao. But the most popular puffed rice might be Kellogg's Rice Krispies.

The puffed rice you need for this recipe should be easy to get a hold of. Amazon carries Arrowhead and Nature's Path, though they come in pretty large packets. I always look for the brown whole grain variety, and one that is not sweetened (so that rules out Rice Krispies). 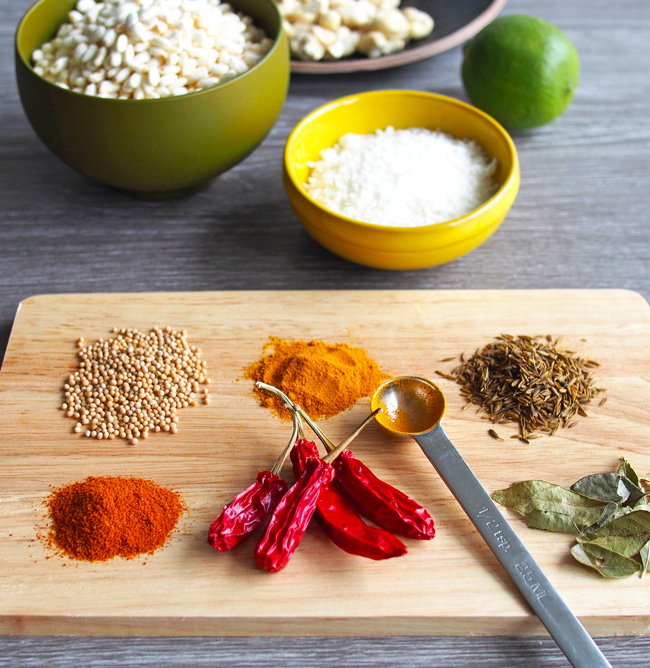 This Murmura Spicy Puffed Rice is made by frying spices, garlic, peanuts, cashews and shredded (desiccated) coconut in a pan with puffed rice cereal.

Because you start with a puffed rice cereal that's ready to be eaten, you don't need to "pop" the rice grains (like in the video), or soak it in water, like in some of the other recipes for Indian murmura (borugulu).

As such, this is a very easy and quick recipe. You can be snacking on this in no time. 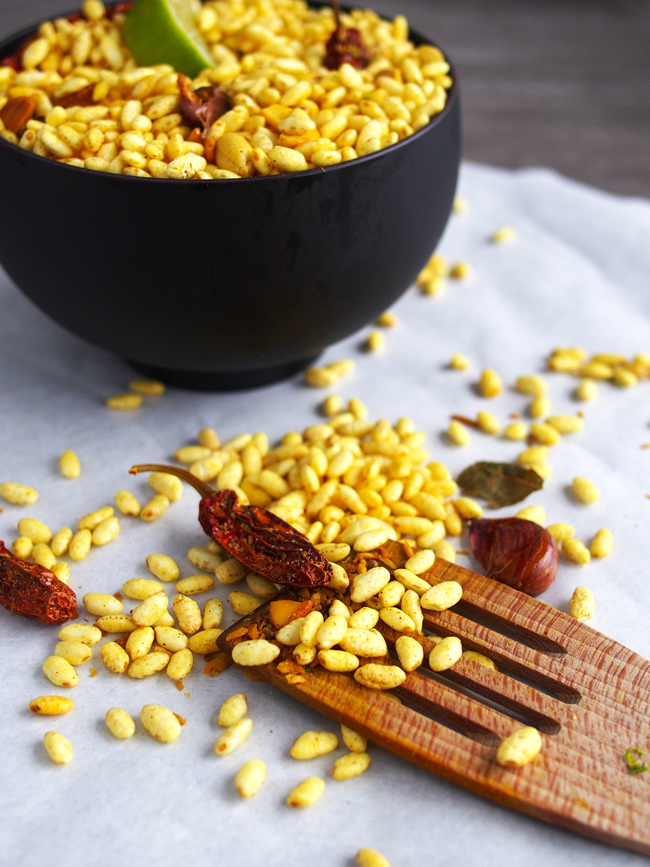 Puffed rice can be enjoyed as a sweet or savory snack

Because I wanted this for breakfast, I didn't make this too spicy. It was perfect for my 11 AM snack attacks, but I could also sit down and have it as a savory breakfast.

Do you have any puffed rice recipes to share? Do you prefer to eat puffed rice as a sweet or savory snack? 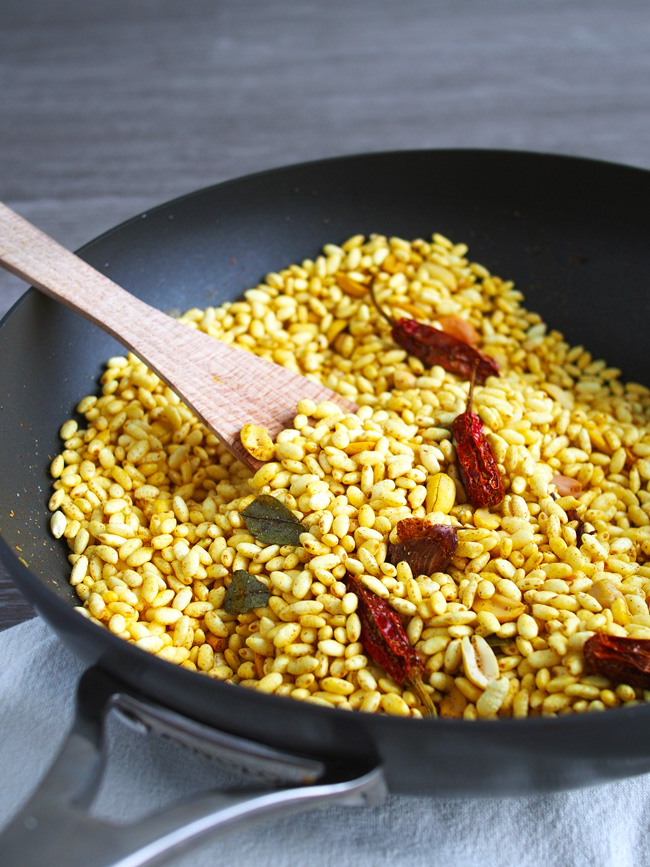 If you find yourself with leftover puffed rice, you can make these healthy puffed cereal bars with it. This recipe is written to be made with puffed oats, but you can substitute it for puffed rice. 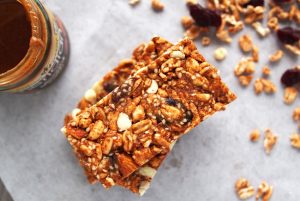 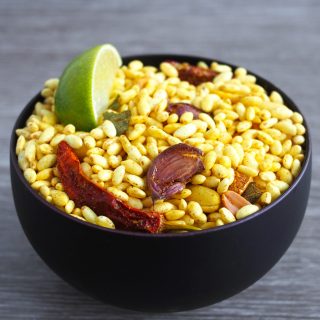 You may want to remove the garlic cloves before serving.
Course: Appetizer
Cuisine: Indian
Keyword: Borugulu, Murmura
Special Diet: Dairy Free, Gluten Free, Vegan, Vegetarian
Author: The Worktop
Cal : 340kcal
Note: Nutrition information is a rough estimate.
Love this?I would appreciate a star review! Snap a picture and share it with me on Instagram using #theworktop and tagging me @theworktop.