This is a fun breakfast cheesecake made with Greek yogurt. It's easy to make and delicious!

We've made it into February, and survived the cold January! Horray! It's time to indulge a little with a dessert for breakfast.  This breakfast greek yogurt cheesecake has a crust made from spelt flakes and is topped with grapes and granola. It's flavored with bergamot, the citrusy floral scent in earl grey teas. It's simple, beautiful and delicious.

A delicious breakfast cheesecake that's made with Greek yogurt

Bergamot is an interesting citrus fruit that looks like a cross between an orange and a lemon. They are about the size of oranges, but they have yellow peels like lemons. The yellow color, however, isn't bright like many lemons. Instead it is a bit more muted, and the bergamots I picked up also have a little green in the peel and the flesh. You can smell the fragrant and floral scent just by holding a bergamot close to your nose, but once you cut open the bergamot, the strong scents will hit you and the warm citrus undertones come through.

The bergamot cuts through the plain taste of the greek yogurt nicely. Because the strong citrus and floral flavors of the bergamot carry the greek yogurt cheesecake very well, you can use a bit less sugar in the recipe if you would like. I didn't find the recipe too sweet, but I also wanted to indulge a little with it. If you want to adjust the sugar level, you can simply swipe a bit of the greek yogurt cheesecake mixture onto your fingers to taste it as you are beating it. It's a no-bake cheesecake recipe, so everything is ready to eat even as you are making it. 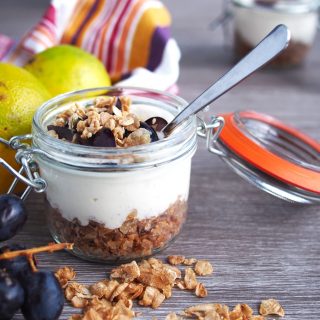 For the spelt crust

Toasted ready-to-eat spelt flakes are different from rolled spelt flakes (which look like oatmeal). You can try to find them in the cereal aisle.
Course: Fruits and Yogurts
Author: The Worktop
Cal : 434kcal
Note: Nutrition information is a rough estimate.
Love this?I would appreciate a star review! Snap a picture and share it with me on Instagram using #theworktop and tagging me @theworktop.

The ingredients and spelt flakes for this post were provided by Rude Health.