Milk toast is an old fashioned breakfast dish that is so easy to make! I love having bread soaked in milk. This recipe uses toasted cinnamon sugar brioche bread.

What is milk toast recipe?

Did you ever eat bread soaked in milk growing up? I don't know if this is a thing, or if it was just our family.

But as kids, when we wanted a quick breakfast or snack, we simply tore up sandwich bread ate them soaked with milk. Often times, I'd top my bowl of milk toast with a spoonful of sugar on top too.

It was a very simple (and cheap) dish I learned to make when I was very little. But I loved how the soggy bread melted with every bite, and the little crunch of sugar that came at the end.

Then, I'd gulp down every last bit of the sweet milk.

Classic bread and milk from my childhood: Tear up a slice of white wonder bread and toss the pieces into a bowl. Pour on enough milk to cover it all. Sprinkle on a spoonful of granulated white sugar.

Is that something you've had before? I've asked my friends, but non have the same memories.

For this recipe, I took that old simple idea of bread and milk, and jazzed it up a little.

If you love old fashioned breakfast recipes like this one, The Breakfast Book is one of my absolute favorite cookbooks. It's filled with an array of comforting breakfast recipes that you'll want to make over and over again.

How to make (fancy) bread and milk

Don't get me wrong. I love the classic bread and milk from my childhood. But I wanted to turn it into a milk toast recipe that is just a bit fancier and brunch table ready.

To do that, I experimented with:

I tried a number of different breads for this classic recipe. Here are my thoughts:

Grill the bread in a bit of butter

While the classic recipe from my childhood just requires soaking plain sandwich bread in milk, I find that grilling the bread in a bit of butter gives it a delicious richness.

To do so, I melt a bit of butter in a frying pan, then simply grill and toast the bread in it until the slices are slightly golden on both sides.

I toast the bread slices whole (instead of cutting it into cubes then toasting), because once toasted and cut into cubes, having 2 sides of each bread cube toasted gives this milk toast just enough texture.

While the bread is still hot, I sprinkle on a mixture of cinnamon sugar. The sweet smell of toasted bread with cinnamon sugar is so comforting!

But if you don't like cinnamon, you can keep it plain with just granulated sugar. Or a touch of nutmeg is also good.

Once the cinnamon sugar is sprinkled on top, then cut the bread slices into cubes.

I prefer my milk toast with cold milk. I think the warm pieces of the brioche bread takes off just enough of the cold edge from the milk.

How to serve bread and milk

The way I serve bread and milk in these pictures is to pile all the toasted bread cubes into a bowl, then pour on cold milk.

Another way to enjoy this breakfast is to dip the warm bread in warm milk piece by piece as you eat it.

Personally, I like to soak the bread in the milk so it softens and pillows. If you find that too soggy, then by all means, enjoy this breakfast as bread dipped in milk.

Either way, I think you'll love this comforting milk toast recipe. It's such a simple breakfast that is oh so comforting.

Make this milk toast recipe for a quick breakfast

I hope you think of this milk toast recipe anytime you are looking for a quick breakfast. It shouldn't take more than 5 minutes to throw this recipe together so it's great for weekday mornings.

If you ever find yourself wondering how to use up milk or leftover bread, I hope this recipe comes to mind too.

P.S. If you love the idea of cinnamon toast in milk, don't miss this Cinnamon Toast in Cereal Milk, which is a twist and homemade version of a cinnamon toast crunch cereal. 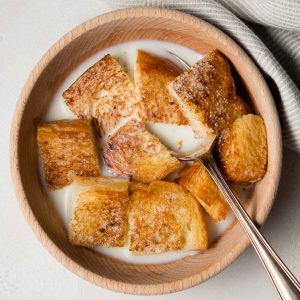 If you love cinnamon (like me!) this is a great article on the benefits of Ceylon Cinnamon vs. Cassia Cinnamon. I always and only use ceylon cinnamon (true cinnamon) because I think it taste better, and more importantly, because cassia cinnamon is more risky to the liver. Unfortunately cassia cinnamon makes up about 90% of commercial cinnamon sold. I urge you to use organic Ceylon cinnamon if you plan on consuming cinnamon regularly. We easily buy it on Amazon. For the recipe, please note this is developed using Ceylon cinnamon, which is milder and sweeter in flavor.
Course: Breakfast, Brunch, Toasts and Sandwiches
Cuisine: American
Keyword: Milk Toast
Special Diet: Vegetarian
Author: The Worktop
Cal : 99kcal
Note: Nutrition information is a rough estimate.
Love this?I would appreciate a star review! Snap a picture and share it with me on Instagram using #theworktop and tagging me @theworktop.
« Ham and Cheese Breakfast Casserole with Tater Tots
Muffin Tin Eggs »