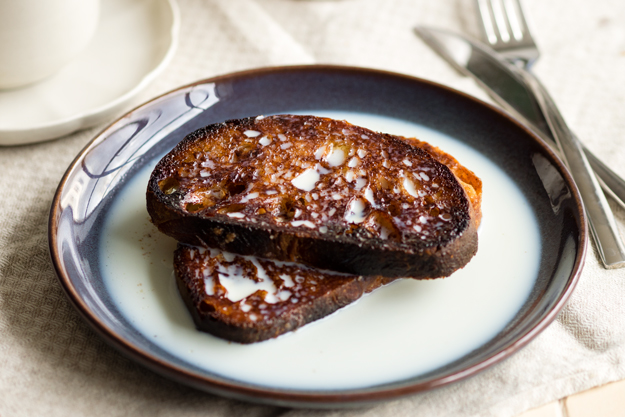 The holiday season is always a nostalgic time for me, especially with childhood foods. Just today, I couldn't stop thinking about Cinnamon Toast Crunch! Which begs the question - are you a cereal-flake or a cereal-milk lover? Or are you indecisive like me?

I could never decide what I liked better - each bite of the crisp cinnamon cereal, or the milk that was sitting at the bottom of the bowl once I was done with the cereal. Sometimes, I'd put in a few more Cinnamon Toast Crunch cereal pieces in the leftover milk, just for one last spoonful of cereal. And I always regretted it because there was never enough milk to properly soak the cereal. 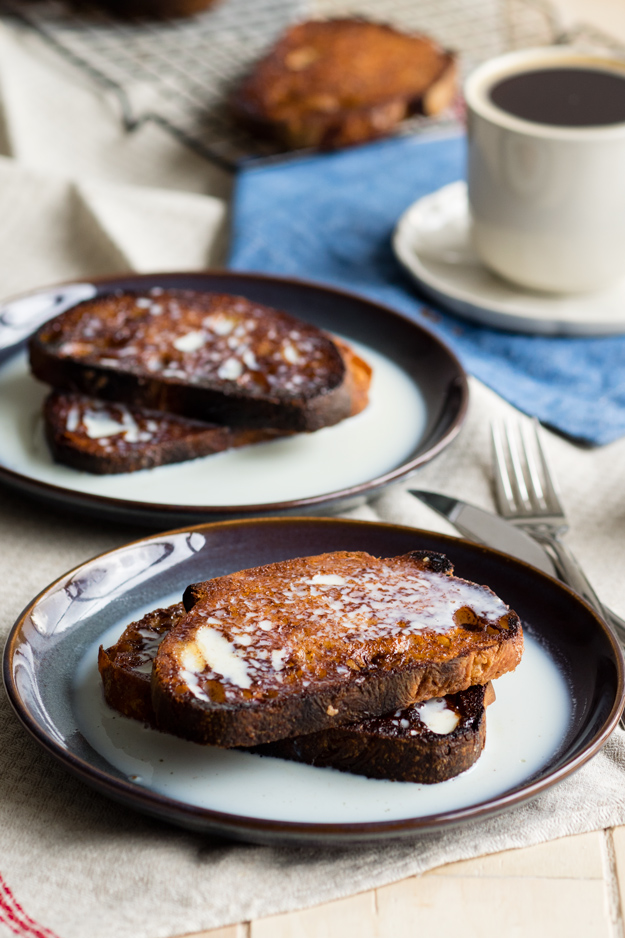 So I wouldn't end my cereal eating on a bad note, I'd add a bit more milk and a bit more cereal into the bowl and start again with the correct milk to cereal ratio. It could be I am OCD about my cereal habits, but if any of you are like that too, let me know so I can feel a bit less weird! 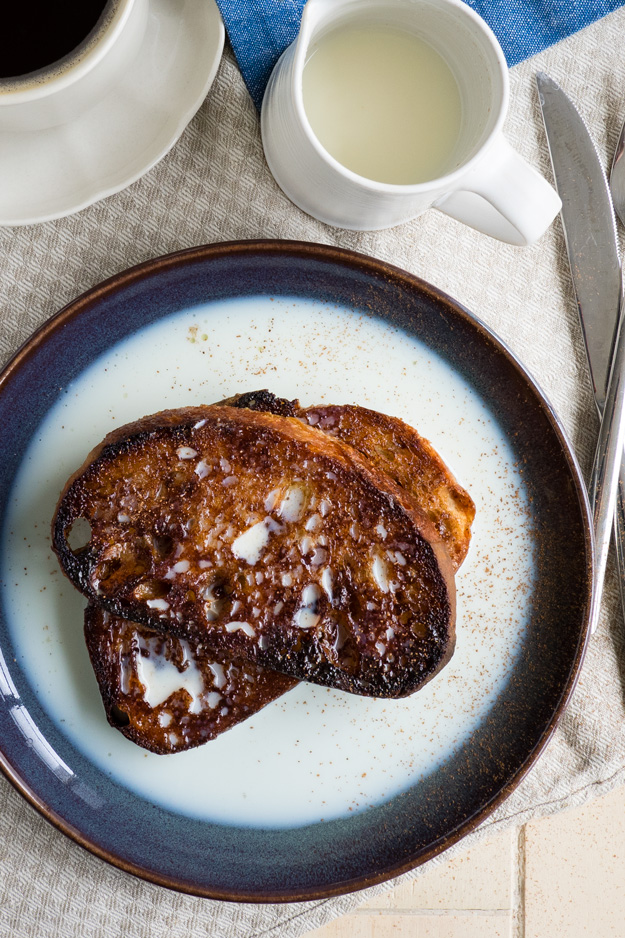 This recipe for Cinnamon Toast with Cereal Milk is my adult answer for when I have a craving for a cereal that isn't readily available in London.

Cinnamon Toast is really easy to make, though if you want a really detailed explanation with photos, check out The Pioneer Woman's post on the right way to do cinnamon toast. She's given it a lot of thought on the variations on how to make it. I give you a very simple straightforward way (and what she concludes as the "right" way). Simply mix the butter, sugar, cinnamon and vanilla together, then spread it on the bread and bake and broil it in the oven. Just make sure you spread the butter mixture to the very edges of the bread so it doesn't burn. 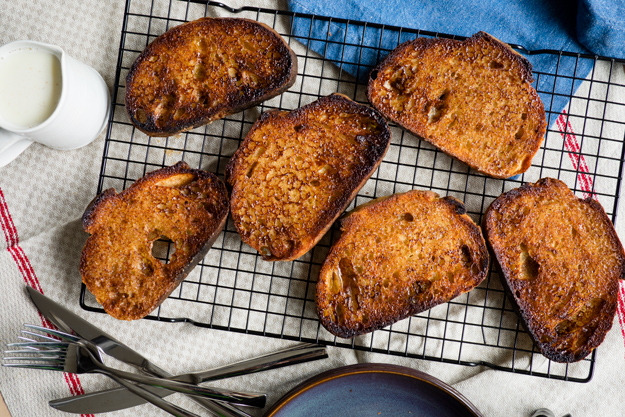 Cereal milk is also very easy to make, and I give you a simple recipe for just soaking the milk in cereal, then straining it. There are other recipe variations out there, such as toasting the cereal first. I found that because I was using the cereal milk with the cinnamon toast, I couldn't taste a difference whether or not I first toasted the cereal. I also added a bit of sweetened condensed milk to make it a little thicker. The cereal milk is still very runny (and perfect for soaking into the cinnamon toast), but it has a tiny bit of body to it from the sweetened condensed milk. 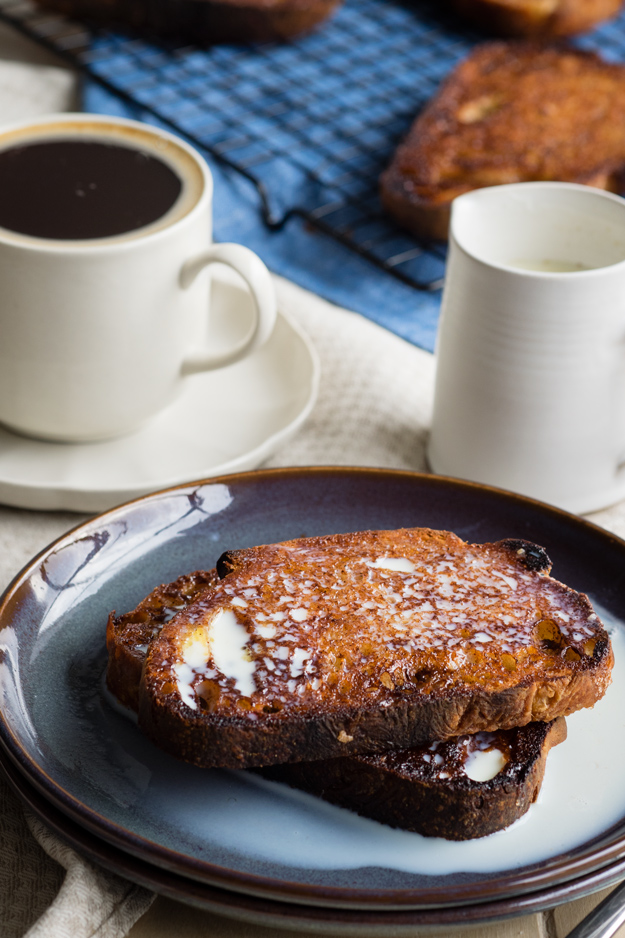 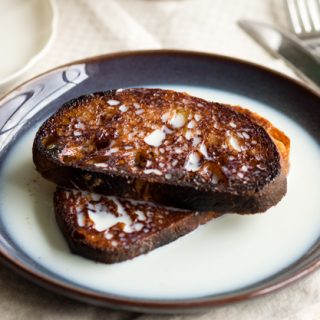 For the cinnamon toast

For the cereal milk

Author: The Worktop
Cal : 266kcal
Note: Nutrition information is a rough estimate.
Love this?I would appreciate a star review! Snap a picture and share it with me on Instagram using #theworktop and tagging me @theworktop.
« Breakfast Nachos with Chorizo and Egg
Peppermint Mocha Puppuccino - Goat's Milk with Carob and Mint »