Get crispy and crunchy French toast with this Ultimate French Toast recipe. Corn Flake French Toast is an easy and delicious homemade breakfast.

This ultimate French toast makes a delicious weekend breakfast. It's perfectly crispy and crunchy, with a delightful custardy middle. And very importantly, this homemade French toast recipe is easy to make on the stovetop.

Have you ever wondered, how do you get French toast so crispy?

It's easy to make crunchy French toast. There's no special equipment or out-of-the-ordinary ingredients. You can do it on the stovetop.

All you need is the the secret ingredient: cereal flakes.

Yes, you read that right. If you haven't tried a cereal crusted french toast before, this might sound a bit strange. But trust me, cornflakes add a whole new dimension to the typical homemade French toast.

(Here's another secret: Another way to get crispy French Toast is by baking it. This Stuffed Baked French Toast has an awesome crisp crust.)

You might know cereal crusted french toast as the Kylie Jenner French Toast. She shared a similar flakey French toast on her Snapchat, and it caused a wave in the breakfast world!

I first came across Corn Flake French toast in Marion Cunningham's The Breakfast Book, which is published in 1987. In it, you can find a recipe she calls JB's French Toast.

She claims that James Beard (yes, the James Beard) once told her they used to serve cornflake crusted French toast in the dining cars on the Santa Fe Railroad. So when you make this crispy French Toast, thank JB.

I love Marion Cunningham's The Breakfast Book for classic breakfast recipes. It's the perfect book for any breakfast lover.

Use Corn Flakes or Frosted Flakes for the French toast crust

In my recipe for this Ultimate French Toast, I use cornflakes. Kylie Jenner's flakey French toast uses Frosted Flakes.

I prefer to use cornflakes over Frosted Flakes because:

You can replace the cornflakes in this recipe with Frosted Flakes though. Your call.

For touch of honey sweetness try Honey'd Corn Flakes in this recipe! You get the crispiness from the corn flakes, but it's not as sweet as using Frosted Flakes.

Ingredients you need to make this Ultimate French Toast:

Easy, right? You'll have this Ultimate French Toast on the table in no time!

Once you start making French toast with a cornflake crust, it'll probably be hard to turn back to making it without the crust.

I really hope you enjoy this Ultimate French Toast recipe, and it becomes a staple brunch in your household!

What to serve to make this an even heartier breakfast

If you are looking for something savory to serve alongside this crispy French Toast, here are some of my favorite breakfast sausages:

Any questions? Feel free to leave in the comments below. 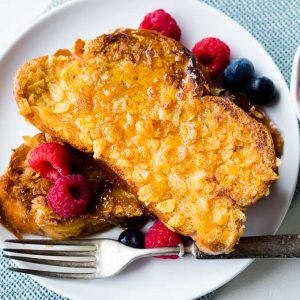