Watermelon! I love watermelons! Just feeling that hollow *thump* when I pat a ripe watermelon makes me salivate.

All summer, we've been eating watermelons just one after another. With no A/C in our flat (or most anywhere in London), watermelons are the quickest way to cool off. During the hottest weeks, when the summer heat made make me so lazy that I wouldn't even want to expend any energy to pick out the seeds to eat the watermelon, I would juice the entire thing and just sip it out of a straw. Ah, sounds crazy, but it feels like autumn is already here in London. I'm really going to miss watermelons. 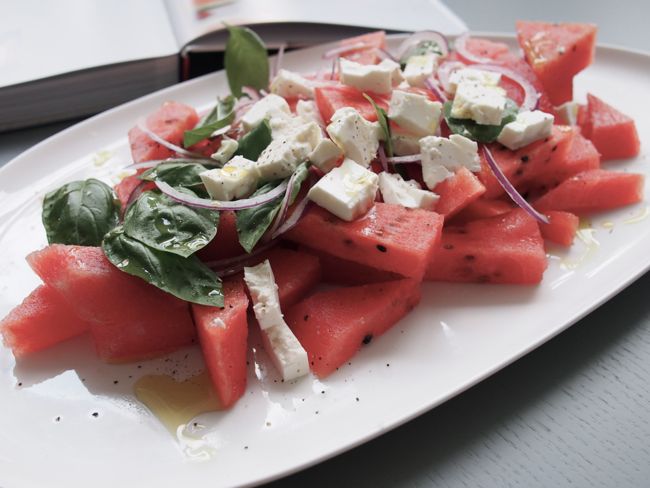 Because they are just so delicious as is, it took me a while to convince myself that I should try to do something with a watermelon. Could anything make my watermelon taste better than it does in its simple and pure form? Seeing Ottolenghi's recipe for a watermelon salad in his cookbook, Plenty: Vibrant Vegetable Recipes

, finally convinced me. If Ottolenghi makes watermelon salad, then okay, I guess could at least give it a try.

One evening when we invited some friends over for dinner, I decided to plate up some watermelon. Nervously, I sprinkled on the purple onions, crumbled on the feta cheese and placed on some basil pickings from my windowsill garden. The real commitment came when I had to pour on the olive oil and grind black pepper over it all. Yes, all over the deliciously crisp and sweet watermelon. At that point, there was no turning back! 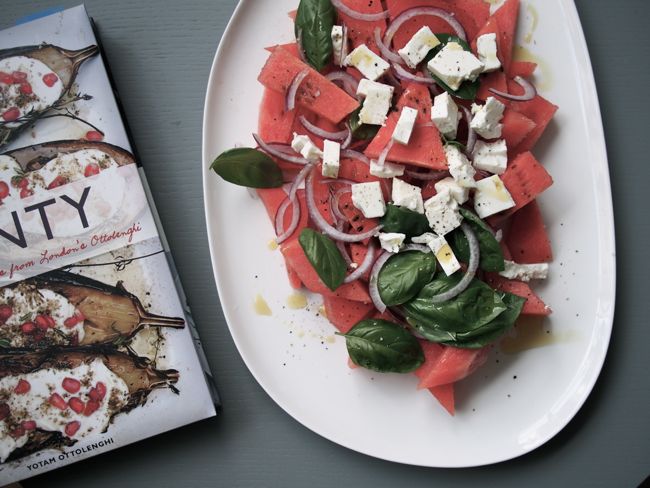 And it was visually stunning - the red watermelon, the purple onions, the green basil, the yellow olive oil, the black pepper, and the stark white feta cheese. All of the colors popped out against one another, and it was definitely beautiful when I set the watermelon salad in the middle of the dining table. And at the end of the meal, there was only once piece of watermelon left. Either my friends actually enjoyed it, or they were too polite to say anything different. You can never tell with the British, anyway.

Anyone else make watermelon salad before? What did you think? 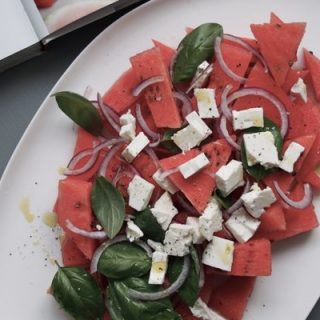 Course: Salads and Vegetables
Author: The Worktop
Cal : 134kcal
Note: Nutrition information is a rough estimate.
Tried this recipe?If you loved making this recipe I would appreciate it so much if you would give this recipe a star review! I’d love to see it too – snap a picture of your finished dish and share it with me on Instagram using #theworktop and tagging me @theworktop.
« Easy Speculoos Popcorn - a Modern Take on Caramel Corn
Honey Roasted Beetroot Salad »