Cooking oatmeal in the slow cooker not only saves you time in front of a stove. It also results in a very delicious bowl of oatmeal.

If I know my family wants oatmeal in the morning, I'll always make it in the slow cooker. Breakfast is ready when we wake up, and I think slow cooker oatmeal tastes better that stovetop oatmeal.

Why use steel cut oats for overnight slow cooker oatmeal?

Do not substitute old fashioned rolled oats for the steel cut oats in this recipe. It won't work!

If you use old fashioned rolled oats in the slow cooker, you need to adjust the liquid amount. It will be about 2 ¼ cup of liquid to 1 cup rolled oats, but I haven't tested that ratio just yet. (I'll update this post when I do.)

How to make oatmeal using a slow cooker?

To make oatmeal using a slow cooker, you literally just need to mix everything together into the pot and cook. You don't stir the oatmeal as it cooks. And you don't even need to open the lid.

I always grease the slow cooker pot before adding in the oats because I use every measure to prevent oatmeal from sticking. You can use a bit of oil on paper towel, or a non-stick cooking spray.

I tend to set my slow cooker on before bed, and then turn on the keep warm function. That way, it's still warm when I am ready for breakfast.

What temperature should I use to cook this overnight slow cooker oatmeal?

Make this slow cooker oatmeal on the low setting.

Technically you can make slow cooker oatmeal on the high setting, but from my experience, the oats tend to stick to the pot more. That's why this recipe uses a low setting.

How much water to use for steel cut oats in the slow cooker?

But if you want a really spectacular bowl of oats (and you do!), try this:

The coconut milk in this slow cooker oatmeal recipe gives the oats an extra creamy richness. And more practically, it keeps the steel cut oats from sticking to the slow cooker pot.

So with this recipe you not only get an extra creamy bowl of steel cut oats, you also save on cleaning time.

You can see in the pictures, the oats aren't overly liquid. The oatmeal is ready to eat!

Typically, I always mix in a bit of fresh milk when I eat my bowl of slow cooker oatmeal. You can see the added milk in the overhead shot of the oatmeal below.

How you eat your bowl of oatmeal is a personal choice, but you won't go wrong with the 4.5 cup of liquid to 1 cup steel cut oat ratio.

This steel cut oatmeal recipe should work in a Crock Pot, an Instant Pot, and other multi-cookers.

I use my Sage (Breville) Fast Slow Pro to make this slow cooker oatmeal recipe. If you aren't familiar with it, it is essentially an Instant Pot, and similar to other multi-cookers. There are so many models on the market these days, and each is slightly different, but generally the same.

How steam escapes from slow cookers and multi-cookers, such as an Instant Pot can vary

This next piece of information is a bit technical, but in order to help you make the best slow cooker oatmeal, it's worth mentioning.

Depending on the model of slow cooker you use, you may get a bit of variation to your slow cooker oatmeal. Why? This is because different models will allow varying amounts of steam to escape.

TIP: If you are using a multi-cooker, steam escapes from the valve. You absolutely need to leave the valve open when using any of these multi-cookers as a slow cooker.

But the difference is, I think it escapes at a slower speed than if you use a Crock-Pot.

It's not necessary for this recipe, but handy to keep around.

Can I double this slow cooker oatmeal recipe?

Yes! You definitely can double this recipe to make a large batch of oatmeal if you are feeding a group. Keep everything in the recipe the same, and simply double the ingredients.

It's also a great recipe to double if you want to make a batch of oatmeal to last several days. This recipe will feed a hungry family of four, so if your family wants oatmeal multiple times a week, go ahead and double the recipe.

How long can you store slow cooker oatmeal in the refrigerator?

Some sites suggest storing oatmeal for up to 5 days in the refrigerator. I tend to store for only 3 days maximum.

If you are storing this slow cooker oatmeal in the refrigerator, make sure it is in an airtight container. Also, don't mix in any fresh milk (dairy or non-dairy) before refrigerating it.

If you want oatmeal as grab and go breakfast options, you can portion it out into individual containers and store it that way too.

When eating this slow cooker oatmeal as leftovers, we simply warm up the oatmeal in the microwave and add in a bit more milk. As with all leftover oatmeal, give it a good stir to make it creamy again.

What makes this slow cooker oatmeal so creamy?

The secret ingredient in this slow cooker oatmeal recipe is coconut milk! The coconut milk makes this oatmeal extra creamy, as well as prevents the oatmeal from sticking to the side of the slow cooker pot.

It does impart a fruity flavor, but it's not overwhelming. Make sure you use a canned coconut milk.

Enjoy this slow cooker oatmeal recipe! Any questions or comments, let me know below. 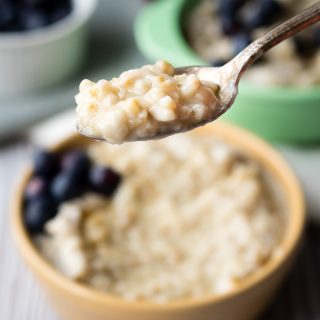 I use my Sage (Breville) Fast Slow Pro to make this slow cooker oatmeal recipe. Please keep in mind that your slow cooker might cook differently, so use your best judgment with your specific slow cooker model.  Specifically, my Sage (Breville) Fast Slow Pro has the following features that your slow cooker might not have:
Course: Breakfast, Oats and Grains
Cuisine: American
Keyword: Slow Cooker Oatmeal
Special Diet: Dairy Free, Gluten Free, Vegan, Vegetarian
Author: The Worktop
Cal : 265kcal
Note: Nutrition information is a rough estimate.
Tried this recipe?If you loved making this recipe I would appreciate it so much if you would give this recipe a star review! I’d love to see it too – snap a picture of your finished dish and share it with me on Instagram using #theworktop and tagging me @theworktop.