Almond milk rice pudding that is vegan and gluten free! A low sugar breakfast made with unsweetened almond milk, and served with pistachios, fresh fruit and maple syrup. 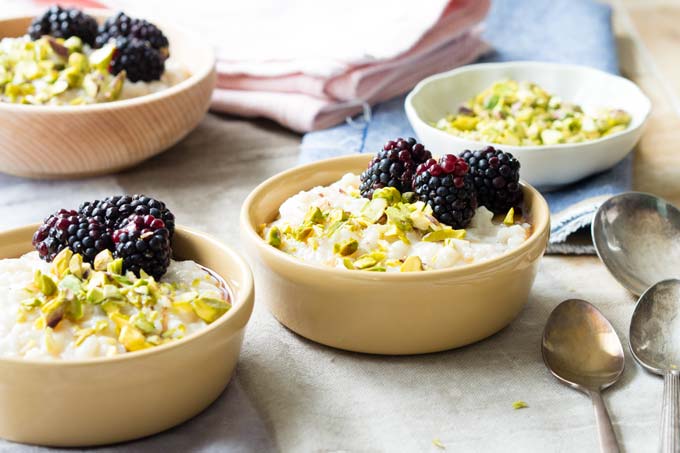 When the weather turns, and we layer on the heavier comforter, the last thing I ever want to do in the morning is toss off the blankets and let in the chilly air.

But the secret to getting myself up in the morning? A warm breakfast that is going to fill me up. This Almond Milk Rice Pudding really hits the spot on the chillier days. If it can coax me out of bed at 6 AM, then surely it can get anyone out of bed. 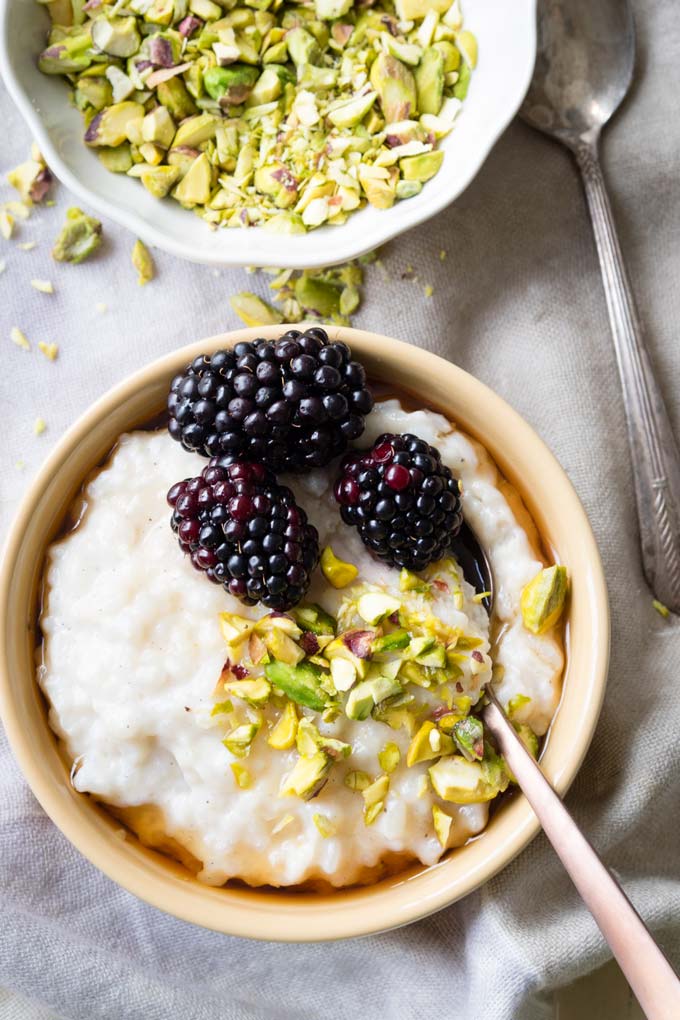 Serve it hot, and this Almond Milk Rice Pudding will warm you up right through. It reminds me a bit of eating oatmeal or porridge for breakfast, but only to the extent that it's a comforting and warm breakfast that is also healthy, and you can chose your own toppings. That's a lot of similarities, isn't it?

The main difference is that rice pudding is often served as a dessert. But if you tweak a traditional rice pudding recipe a little, like I did below, it's a perfectly delicious breakfast that is also healthy. 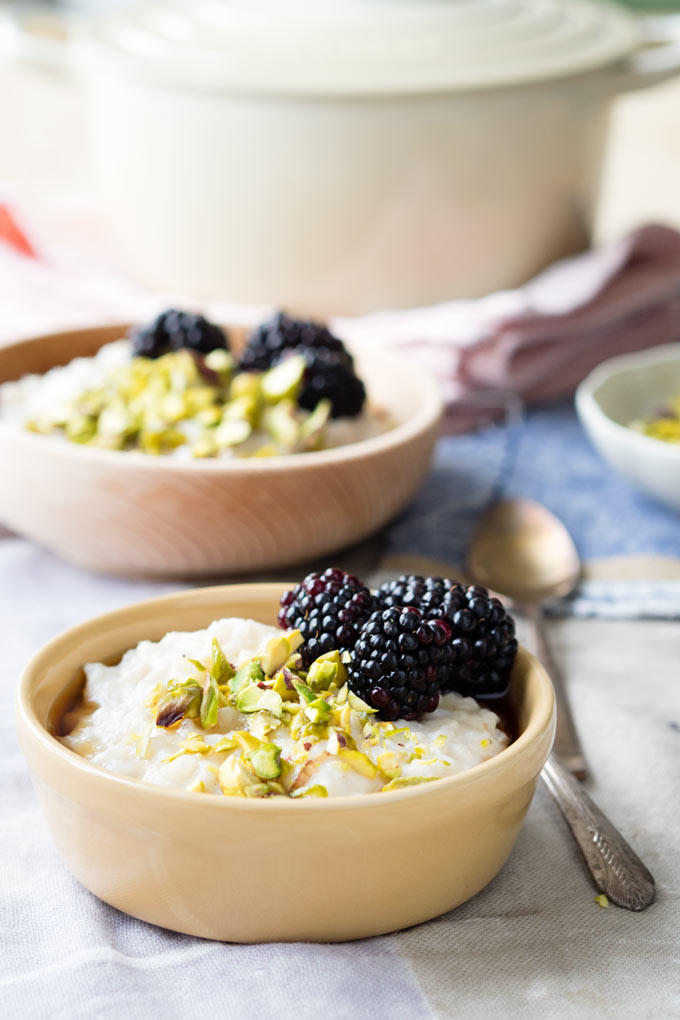 Beyond loving how this Almond Milk Rice Pudding tastes, there are so many healthy bits to it. Almond milk has no saturated fat or cholesterol, and has fewer calories than whole milk. You can buy fortified almond milk, so you are getting calcium, vitamins and other minerals.

This almond milk rice pudding is only sweetened with maple syrup after cooking, and has no sugars added in when it is cooked. Therefore, you have complete control over how much sweetness you would like to add to it. Use the maple syrup sparingly to keep it low sugar. Or sweeten it with only fresh fruit instead. 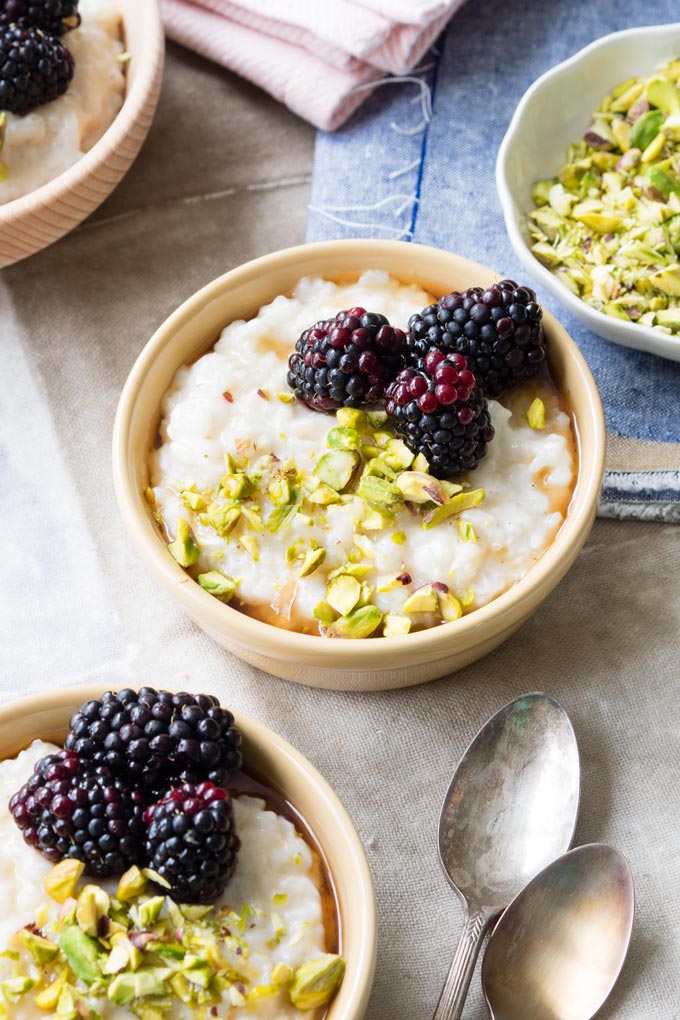 I top it with fruit and pistachios, which are filled with essential nutrients and healthy fats. Pistachios also contain fewer calories and more potassium and vitamin K per serving than other nuts. You can top it with pistachios too, or any other nuts of your choice. This Almond Milk Rice Pudding also works well with a granola topping if you're in a pinch.

If you're used to having rice pudding as a dessert, you might not find it as creamy as rice pudding made with whole milk, cream or coconut milk. But it's plenty creamy, and the good news is that it is free from saturated fat, which you don't get with the other milk options. To be honest, after trying rice pudding with almond milk, I prefer it to regular milk because it gives it a distinct nutty taste, and it makes the dish feel more suitable for a breakfast as opposed to a dessert. 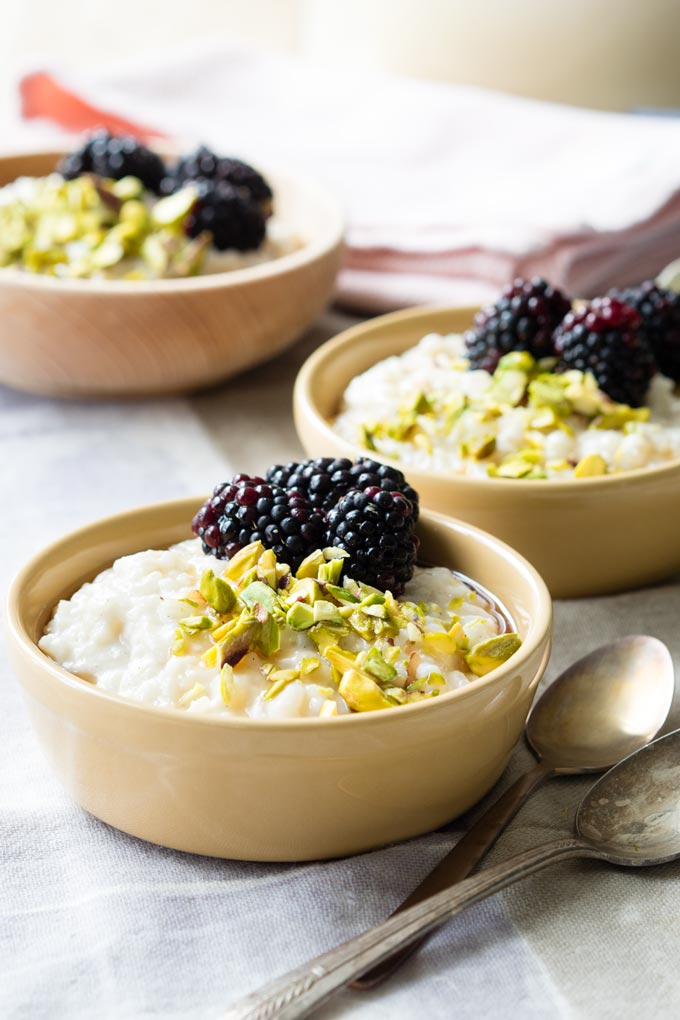 I was inspired to make this Almond Milk Rice Pudding after reading the Natural Food Kitchen by Jordan Bourke. It is a beautiful book that has recipes using alternative ingredients, rather than the traditional ingredients found in most recipes. The book also does not include any recipes with refined sugar, but relies on other natural ingredients to add sweetness. 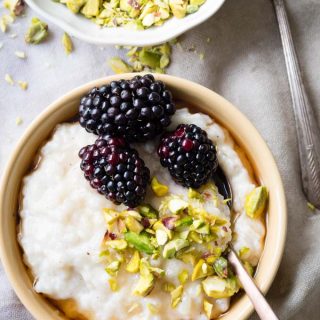 3.56 from 18 votes
Print Recipe Save RecipeSaved!
Serves: 6
Prep: 5 mins
Cook: 25 mins
Total: 30 mins
Almond Milk Rice Pudding that is vegan and gluten free. A healthy low sugar breakfast made with almond milk and served with fresh fruit, pistachios and maple syrup. There is no sugar added to the base recipe, so you have complete control on how much maple syrup you would like to top it with, or leave it off and sweeten this rice pudding with just fresh fruit.

You can make this Almond Milk Rice Pudding the night before and store it in the refrigerator in an air tight container. If you like it warm, simply heat it up on the stovetop or in the microwave in the morning. Otherwise it is delicious served cold too.
Course: Oats and Grains
Special Diet: Dairy Free, Gluten Free, Vegan
Author: The Worktop
Cal : 113kcal
Note: Nutrition information is a rough estimate.
Love this?I would appreciate a star review! Snap a picture and share it with me on Instagram using #theworktop and tagging me @theworktop.