To make this Golden Milk recipe with Coconut Milk, you simply whisk turmeric, cinnamon, ginger, black pepper, coconut oil and maple syrup into coconut milk in a small saucepan. This Turmeric Coconut Milk is nourishing and can provide many health benefits. Easy to make and vegan.

I used to always have to make my mug of golden milk at home before it became trendy.

These days, my life's gotten a bit easier because I can find golden milk on many coffee shop menus.  It goes by many names: golden mylk, turmeric latte, turmeric milk, golden milk latte.

And you can even order golden milk made with an assortment of different milks - cow's milk, almond milk, cashew milk, oat milk, and coconut milk. More often than not, I find vegan golden milk on the menu.

You can make golden milk with different types of milk, but the fruitiness of the coconut milk brightens up the earthy taste of turmeric

The subtle differences of golden milk made with different types of milks is fascinating. If you ever have the time, I'd recommend making golden milk with each of the different milks so you can find your favorite.

Today, I'm sharing a Golden Milk Recipe with Coconut Milk (Turmeric Coconut Milk). I picked coconut milk because I find that the fruitiness of the coconut really brightens up the earthy taste of turmeric. And if you haven't tried that before, I think you will enjoy it.

What's the difference you ask? Well, there are two ways to make golden milk at home. The first requires making a golden milk paste, and whisking a spoonful of that paste into a cup of milk each time you would like to drink golden milk.

You make the golden milk paste ahead of time, so it's very quick to make a mug of golden milk when the craving hits. I go into details of the "paste method" in my Spiced Golden Milk recipe with turmeric paste, if you are interested in reading more about it.

The recipe for this Golden Milk with Coconut Milk does not require a golden milk paste. Instead, you whisk spices directly into a pot of warm coconut milk and drink immediately.

This recipe is more convenient if you don't plan on drinking golden milk for several days in a row, since you aren't stuck with using up a small jar of golden milk paste.

But at the same time, it takes a bit more effort to make each cup of golden milk since you need to open the spice cabinet and measure out a handful of spices each time.

Don't let that deter you though! This golden milk recipe with coconut milk is very easy.  When I say "it takes a bit more effort," I mean it might take you five minutes before you have this delicious warm milk drink in your hands.

If you have time though, you can also let the turmeric coconut milk simmer a bit longer on the stovetop, so the flavors of the spices have more time to develop and steep.

What kind of Coconut Milk do I use in this Golden Milk?

Not only is this drink delicious, there are many health benefits

If you see golden milk or turmeric latte listed on your local coffee shop menu and haven't tried it before, I'd definitely suggest you to do so at least once.

The benefits of tumeric are long and many, including having anti-inflammatory properties and boosting your body's antioxidant capacity.

And even if your local coffee shop serves golden milk, this turmeric coconut milk is one of those recipes that you can easily make tastier (and for cheaper!) at home. Plus you can choose exactly what kind of milk you want to use for your golden milk -- in this case, coconut milk!

I know adding turmeric to warm milk might sound a bit unconventional, so if you aren't quite ready to try this turmeric coconut milk, I'll point you in the direction of this Warm Spiced Milk and Honey recipe. 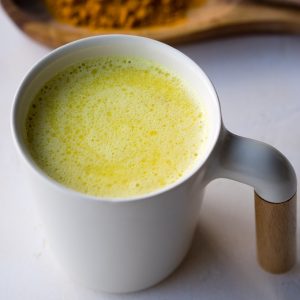 If you would like to make golden milk using a golden milk paste, see this recipe. If you make the recipe with canned coconut milk, you may want to opt for a low fat version, and you probably want to substitute half of it with another type of milk alternative.
Course: Drinks
Cuisine: American
Keyword: Golden Milk with Coconut Milk
Special Diet: Dairy Free, Gluten Free, Vegan, Vegetarian
Author: The Worktop
Cal : 128kcal
Note: Nutrition information is a rough estimate.
Love this?I would appreciate a star review! Snap a picture and share it with me on Instagram using #theworktop and tagging me @theworktop.