We love this easy Raisin Bread French Toast for breakfast or brunch! It's also a great recipe if you are looking for what to do with raisin bread.

This is a delectable brunch recipe and perfect for a lazy Saturday morning at home. But it's an easy recipe, so it's also quick enough to make for weekday breakfasts too.

You should have no excuse.

Grab a loaf of cinnamon raisin bread (leftover - almost stale loaf, works great), get to the kitchen, and you'll have breakfast on the table shortly.

Maybe you can tell that I love a good French toast. Making French toasts with different types of bread and different cooking styles has become a favorite project of mine lately.

What to do with raisin bread?

Today I'm sharing with you a quick cinnamon raisin French toast. Because well, I bought a loaf of raisin bread and ended up with quite a lot leftover.

So the inspiring question I asked myself:

What do I do with this loaf of raisin bread?

When the loaf was fresh from the supermarket, we ate it with a smear of butter. Then the next morning, for something healthier, we had it with DIY almond butter and easy blueberry jam with chia seeds.

Then, the following day came my favorite. We had this raisin bread French toast for breakfast.

Raisin bread french toast is one of the easier French toast recipes because you start with what I call a cheater ingredient: raisin bread.

Raisin bread is already sweetened and often filled with cinnamon, so you'll just need these basic ingredients for dipping the bread:

TIP: If you love vanilla, try a double-fold Madagascar Vanilla Extract. What does double-fold mean? Made with twice the amount of vanilla beans for an incredibly full flavor.

Once you have your ingredients (full list in the recipe below), beat the egg, milk and vanilla together. Then transfer the egg dip to a wide bowl, like a pasta bowl, so it's roomy enough to dip the raisin bread toast.

When you come to cook it, heat a skillet over medium-high heat.

And this is an important step: add a knob of butter on the hot skillet to melt. The richness of the butter is so good with the cinnamon raisin bread.

Working one slice at a time, dip each slice of raisin bread for about 20 seconds, and flip and allow to soak for another 10 seconds.

TIP: To make French toast quick, a square skillet is very handy because it can make 4 slices at once, and the low edges of the pan make it easy to flip.

Place the egg dipped bread on the skillet and cook for about 2-3 minutes per side, until golden brown.

You'll probably know it's done from the comforting scent filling your home. But you can also tell because the French toast should feel slightly firm to the touch.

I served this decadent brunch with a knob of butter on top, a dusting of cinnamon sugar and maple syrup. Yes, in case you caught that. This breakfast is cooked in butter, and topped with butter. Truly decadent!

Before you dive right in with making this breakfast recipe here are a few tips to help you.

Give your French toast a beautiful sheen

To give your raisin toast French toast a nice sheen when you serve it, immediately sprinkle each slice with granulated sugar when it comes off the skillet.

You can also then top it with a dusting of cinnamon, making sure some fall onto the edge of the plate for presentation.

What if my raisin bread loaf is a different size from yours?

The picture above shows my loaf of raisin bread. You can see that the loaf I buy is a bit small compared to American standards, the type I grew up eating. Call it European sizing!

For the loaf size above, I usually use three slices of bread for one egg. So if I use 2 eggs, I'll make 6 small slices of cinnamon raisin bread French toast.

For larger loaf sizes, you might be able to get 3 slices of raisin bread for 2 eggs. This is one of those recipes that you'll have to use your judgment a bit as store-bought raisin bread can vary.

What else can I add to the recipe?

To make it a special treat here are a few ways you can tweak the recipe:

Do you love a good French toast recipe?

Ah and as I've mentioned above, making French toasts all sorts of ways is my thing lately. This cinnamon raisin French toast is just one of the many recipes I have on my site.

I really hope this Raisin Bread French Toast recipe becomes a favorite weekend treat for your family. Any questions on how to make this recipe, feel free to let me know in the comments below. 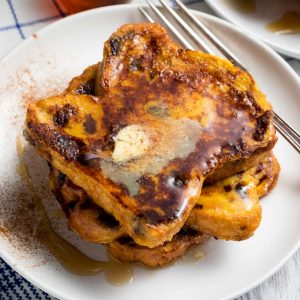 4.84 from 6 votes
Print Recipe Save RecipeSaved!
Serves: 4 slices
Prep: 10 mins
Cook: 10 mins
Total: 20 mins
We love this easy Raisin Bread French Toast for breakfast or brunch! It's also a great recipe if you are looking for what to do with raisin bread.