Cinnamon Brown Sugar Popovers are best enjoyed straight out of the oven. You can make these easy popovers in a muffin pan, so no extra equipment is required. 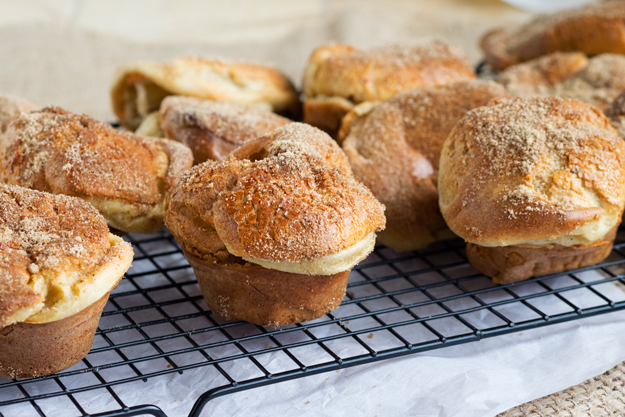 Who loves a warm popover right out of the oven? 🙋🏻‍♀️*Raises hand!!!* And just about every single brunch guest that I have ever had over when I make these.

I wouldn't be lying if I told you that I think this is the world's best popover recipe. I am definitely biased, so maybe you want to take what I say with a grain of salt.

But when a pan of these easy popovers come out of the oven, they usually end up straight in my mouth. I imagine that will also happen to you too.

So, I try to make them only when I'm hosting a fun brunch party and I have guests who will share these sweet popovers with me. 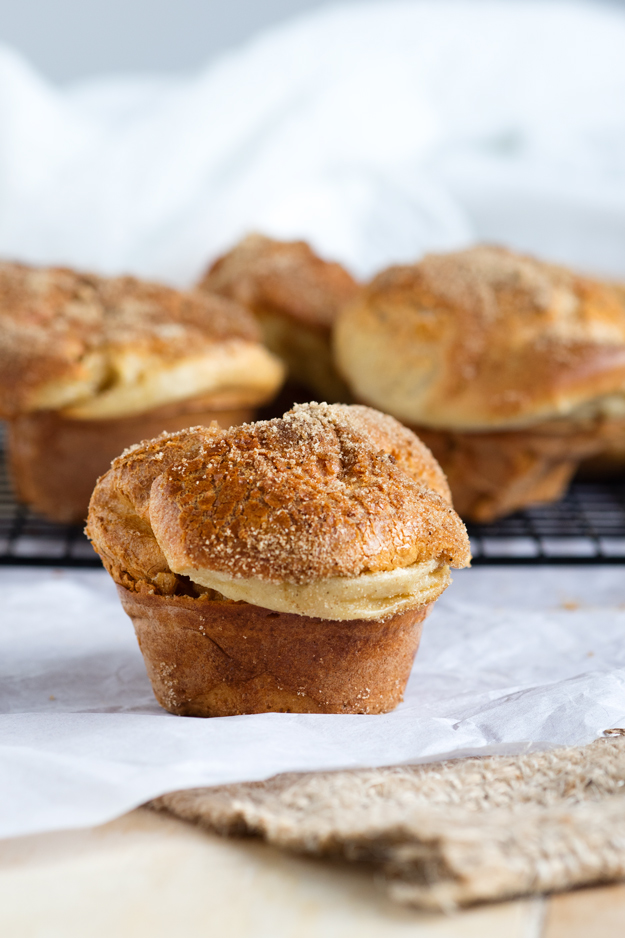 Did you know you can make popovers in a muffin pan?

For the longest time, I shied away from making popovers at home because I didn't have a dedicated popover pan. A lot of recipes told me that I needed one of these funny looking pans.

But here's the secret I want to tell you. You can make these popovers in a muffin pan! That's right. This easy popover recipe can be made in just a regular muffin tin.

Making popovers in a muffin tin

While popovers made in a muffin tin might look a bit shorter than traditional popovers you might get a restaurants, the taste and texture is just as amazing.

To give you a visual comparison, this is a dedicated popover pan. Deep tapered cups are used to give your popovers even baking and better air circulation.

But you want a popover today, and you don't have one of these sitting in your kitchen. Fear not!

You can buy this pan for next time (trust me, if you make these once, you'll make them again). But the more pressing question. What can you use instead of a popover pan today?

Popover pan compared to a muffin pan for making popovers

In comparison, this is a standard muffin tin. The spacing between the holes are closer together and the cups are not as deep.

But this is the type of pan I use to make this easy popover recipe.

If you don't have a special popover pan, don't let that hold you back. You can use one of these regular muffin pans to make popovers. 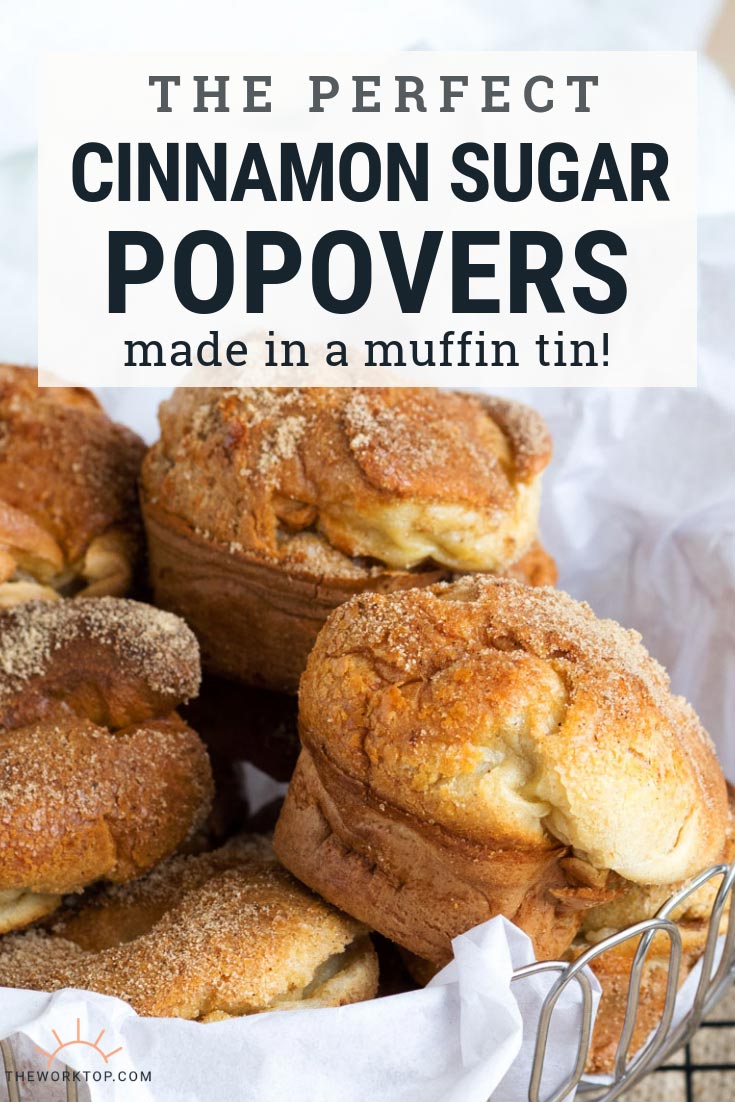 The batter for this Cinnamon Brown Sugar Popover recipe is simple to make - it should only take about five minutes to mix it up. The hardest part about these popovers is waiting for them to bake in the oven.

When you make these sweet cinnamon sugar popovers, my tip is to incorporate it into your wakeup routine. This is how it works for me: 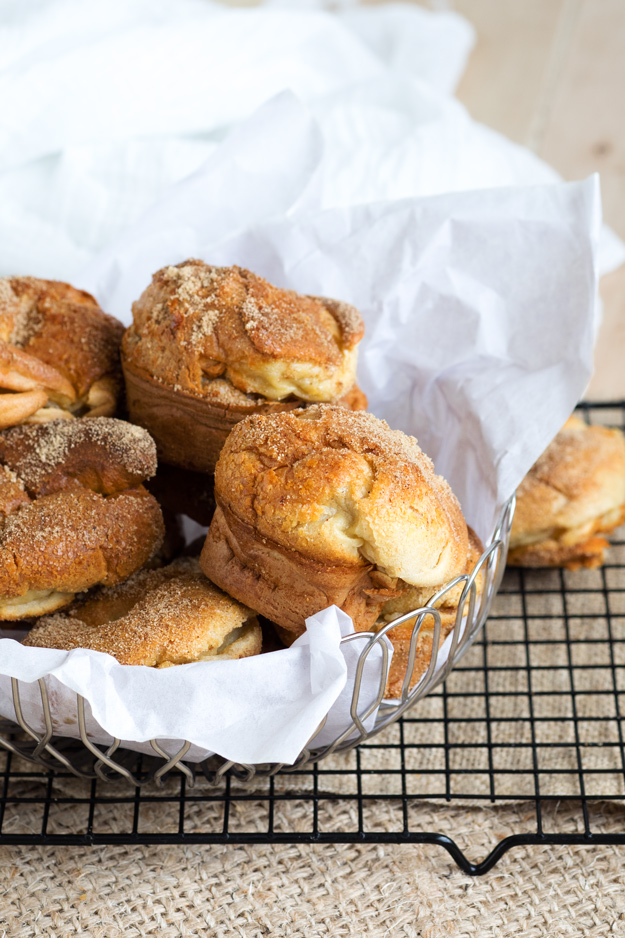 One final tip...as tempting as it is to check on how the precious popovers might be doing in the oven, don't open the oven door while these are baking!

Popovers rely on steam in the batter to make it rise. If you open the oven door while they are baking, then the heat will escape and they may not turn out right.

If you must open the door to check on them, only do so when they are just about done time-wise. That way, the outside of the popovers should be set enough so they won't collapse upon removing them from the oven.

Enjoy this easy to make sweet popover recipe that can be made in a muffin tin! 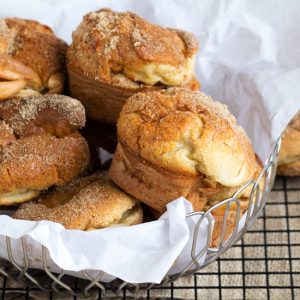 Cinnamon Brown Sugar Popovers - Made in a Muffin Pan

4.37 from 11 votes
Print Recipe
Serves: 12 popovers
Prep: 5 mins
Cook: 1 hr
Total: 1 hr 5 mins
Cinnamon Brown Sugar Popovers are best enjoyed straight out of the oven. You can make these easy popovers in a muffin pan, so no extra equipment is required.

For the cinnamon sugar topping

Recipe based on flour cookbook by Joanne Chang.
Course: Breads and Muffins, Breakfast, Brunch
Cuisine: American
Keyword: Popovers
Special Diet: Vegetarian
Author: The Worktop
Cal : 197kcal
Note: Nutrition information is a rough estimate.
Tried this recipe?If you loved making this recipe I would appreciate it so much if you would give this recipe a star review! I’d love to see it too – snap a picture of your finished dish and share it with me on Instagram using #theworktop and tagging me @theworktop.