Today I want to share one of our quick to-go breakfasts now that the fall weather has arrived! All things apple and cinnamon are always on my mind.

This apple cinnamon oatmeal is not only delicious, but it's healthy too. It takes no more than 10 minutes to make.

And on cool weather mornings? It's the best because it really warms you up.

This is a simple recipe for a healthy apple cinnamon oatmeal

Making oatmeal is a very simple concept - boil oats in water. But do you ever feel like it's a big bowl of mush? That's probably because sometimes, the seemingly easiest dishes often have tricks to make it turn out perfectly.

I'll go through exactly how I make the perfect bowl of homemade apple cinnamon oatmeal below, with my best tips.

How to make apple cinnamon oatmeal

This homemade apple cinnamon oatmeal is very easy to make. It takes less than 10 minutes to get a bowl of this oatmeal on the breakfast table. Best of all, everything is cooked in one pot on the stovetop.

There are five simple ingredients in this oatmeal recipe:

For a richer breakfast oatmeal, you can replace the water with milk or a milk alternative.

You may have made oatmeal a million times by now, or maybe you are new to it. Either way, there are a few tricks that I always follow to make delicious tasting oatmeal.

Lightly fry the apples before adding the oatmeal

To make this homemade oatmeal, my first trick is to lightly fry the apple chunks in coconut oil. This just starts to soften up the apples a bit, so you don't end up with hard apple chunks in your oatmeal.

Lightly toast the oats before adding the liquid

Then, I also toast the oats to give them a richer complex taste. Once the apples have lightly softened, I pour in the oats and stir them a bit in the hot pot.

Yes, you can make this apple cinnamon oatmeal in just one pot!

Stir the oatmeal to get the perfect consistency

My last secret to making the best oatmeal is to use a porridge spurtle. It's a funny word, and it's also a bit of a funny tool.

So, why does oatmeal made with a spurtle taste better? The main reason is that using a spurtle prevent lumps forming during the process of cooking oatmeal.

The round shape of a spurtle allows the oats to be stirred easily, without the dragging effect you would get by using a wooden spoon. This simple movement prevents lumps in your cooked oatmeal.

And another benefit? The spurtle’s smaller surface area prevents oatmeal from sticking to it.

(Did this pique your interest? You can read more about spurtles here.)

No refined sugars in this healthy apple cinnamon oatmeal

To keep this apple cinnamon oatmeal healthy, I don't add any refined sugars in it. I also don't add any sweeteners into the oatmeal while I am cooking it.

Instead, I top a finished bowl of oatmeal with some maple syrup before I'm ready to eat my breakfast. That way, I can see exactly how much natural sweetener I'm adding.

For those of you with kids, topping the maple syrup on at the end also keeps my little one happy because he can see it. If I mix it in before he sees the bowl, he always asks for more. But when he sees me pour the maple syrup on, he's happy.

Can you save oatmeal leftovers?

Yes! You can definitely cook extra so you have healthy apple cinnamon oatmeal leftovers. We do this often in our home.

This is a quick oatmeal recipe, but if you want to skip pulling out the ingredients and using the stovetop the next day, you can make a batch of this oatmeal.

To heat this leftover oatmeal in the microwave: I simply add a splash of milk to it, give it a good stir, then pop it in the microwave for about 1 minute. The exact time for your microwave may vary though.

You can also heat this leftover oatmeal up on the stove top. Add in a bit of milk just to loosen it a bit, then warm it up, stirring on low heat.

Oatmeal tends to keep absorbing liquid, so you might find that it has congealed a bit in the refrigerator overnight. That's why you need to add a splash bit more liquid in it.

Get cooking your own homemade apple cinnamon oatmeal

Like I said, this healthy oatmeal breakfast is really straightforward. So I'll leave you to the recipe below.

As always, any questions, comment below or drop me an email. I don't think you'll have any trouble making this easy apple cinnamon oatmeal. But I'm always happy to help you troubleshoot if you do.

If you love oatmeal, here are a few other oatmeal breakfast recipes:

Lots and lots of other apple and cinnamon breakfast recipes you might love: 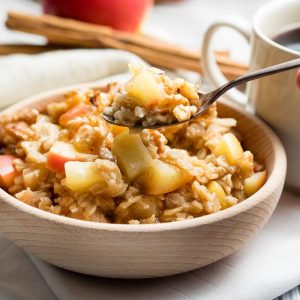 You can store any leftovers in the refrigerator in an airtight container for a couple days.  To reheat in the microwave: I simply add a splash of milk to it, give it a good stir, then pop it in the microwave for about 1 minute. The exact time for your microwave may vary though. To reheat on the stove top. Add in a bit of milk just to loosen it a bit, then warm it up, stirring on low heat.
Course: Breakfast, Brunch
Cuisine: American
Keyword: Apple Cinnamon Oatmeal
Special Diet: Dairy Free, Gluten Free, Vegan, Vegetarian
Author: The Worktop
Cal : 567kcal
Note: Nutrition information is a rough estimate.
Love this?I would appreciate a star review! Snap a picture and share it with me on Instagram using #theworktop and tagging me @theworktop.
« Nutella Crepes
Homemade Pop Tarts - Healthy Alternative »