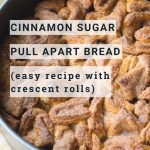 This Cinnamon Sugar Pull Apart Bread is made with crescent rolls, meaning you can get this in the oven in just 10 minutes or less! A quick and easy breakfast recipe designed to satisfy your fall craving for cinnamon and spice. A fun and unique way to have crescent rolls for breakfast. 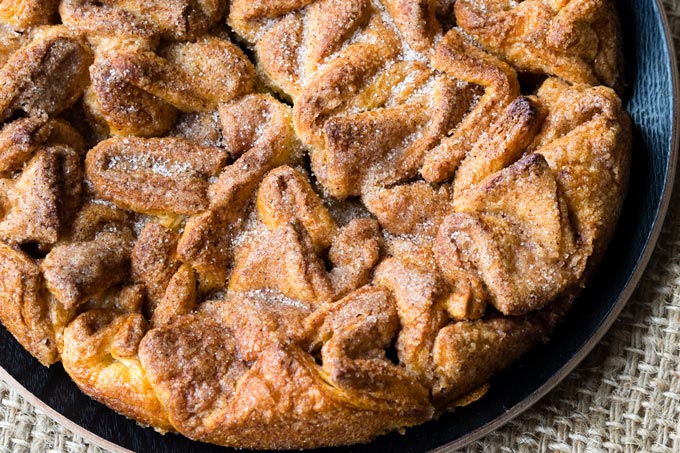 If these little Cinnamon Sugar Pull Apart Bread pieces could talk, they would say:

"Hi guys! I'm back in full force! It's autumn and I'm sure you're feeling like you can't get enough of me and my cinnamon spice! Please bake me. Please eat me. Please share me with your friends and family over and over again, before winter comes along and you leave me behind and run with open arms to peppermint." 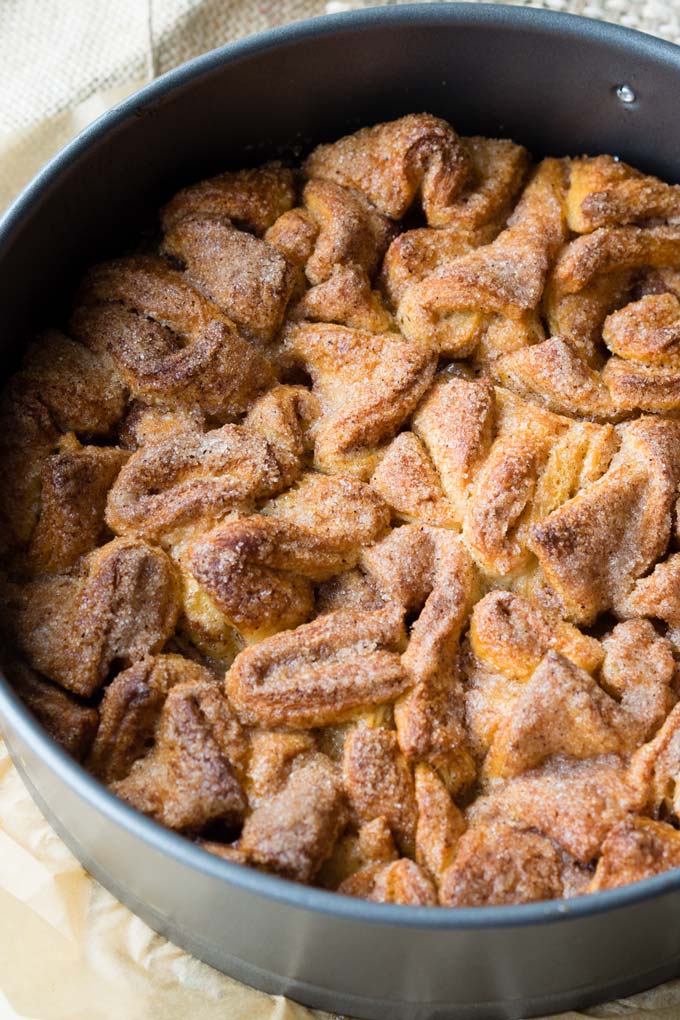 Autumn is in full force in London and my tastebuds have been begging for a cinnamon-and-spice overdose at breakfast.

I get that there's no rule saying you can't use cinnamon year round, but there's a switch in my brain that ticks on when the air cools down and the sounds of crisp rustling leaves ring like music in the parks. I'm thinking about starting on my seasonal hot pumpkin spice drink too already. 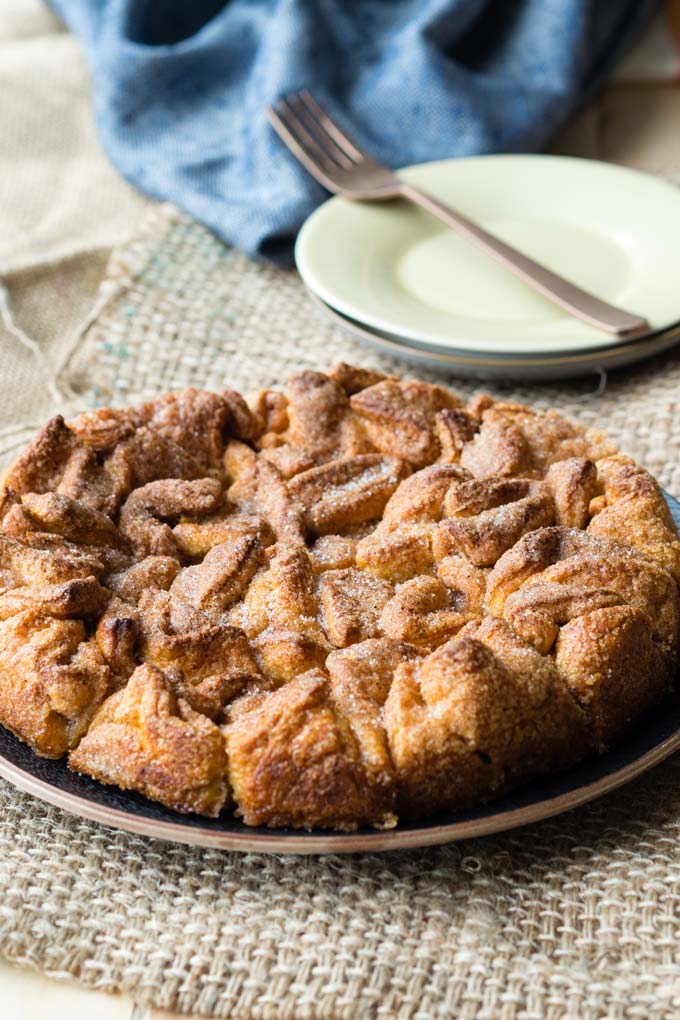 Here you go. Have this Cinnamon Sugar Pull Apart Bread made with crescent rolls for breakfast. Quench any fall season craving for cinnamon and spice in one bite.

Baking this cinnamon crescent roll recipe fills our entire flat with the sweet scent of fall. Sometimes I think I could bake this over and over again, just to keep the smell going.

It's a good thing that this Cinnamon Sugar Pull Apart Bread is made with crescent rolls because that means you can get this in the oven in just 10 minutes or less! You read that right. Many pull apart bread recipes require you to allow the dough to rest and rise. Not this one. This easy cinnamon pull apart bread recipe only takes 10 minutes because it uses trusty little crescent rolls.

Any time I think of a breakfast idea with crescent rolls, I secretly do a little dance inside. I love recipes that use crescent rolls for breakfast because it means (1) it's quick. And well, that's the only reason I need. 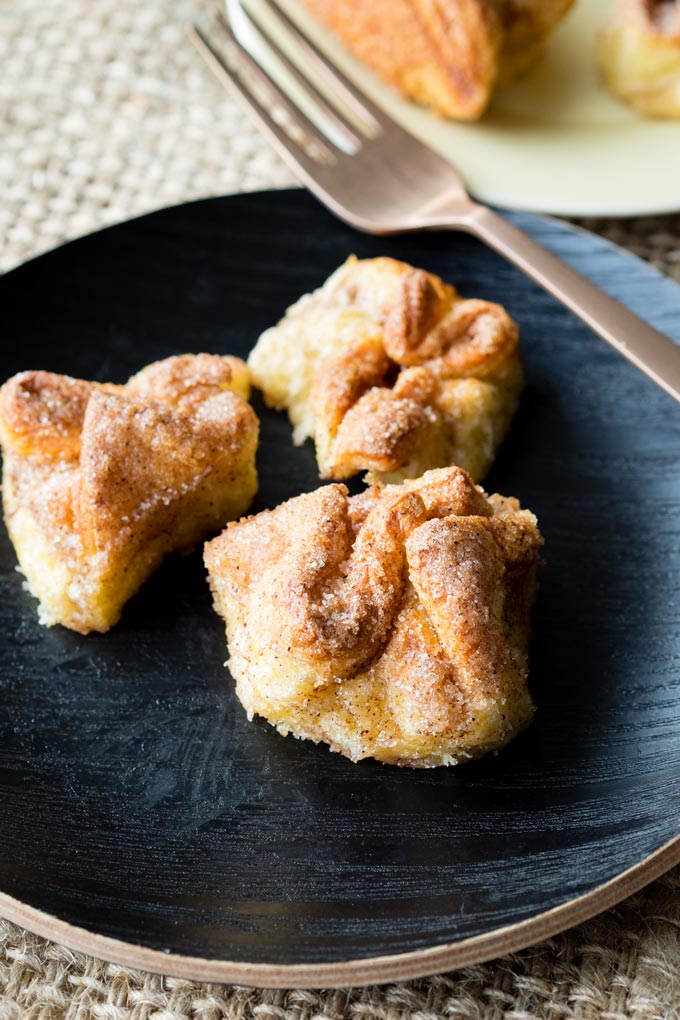 But here's the warning. This easy cinnamon pull apart bread is quick to make and also quick to disappear.

Because it's a pull apart bread, there's no need to wait for someone to serve you. Everyone, please just reach your hands in there and pull off a piece. Crescent rolls are tastiest when warm, so get in there quickly!

The only thing that will linger is the sweet scent of the cinnamon sugar in the kitchen, and the fond memories you make sharing these pull apart style cinnamon sugar crescent rolls with your family and friends. 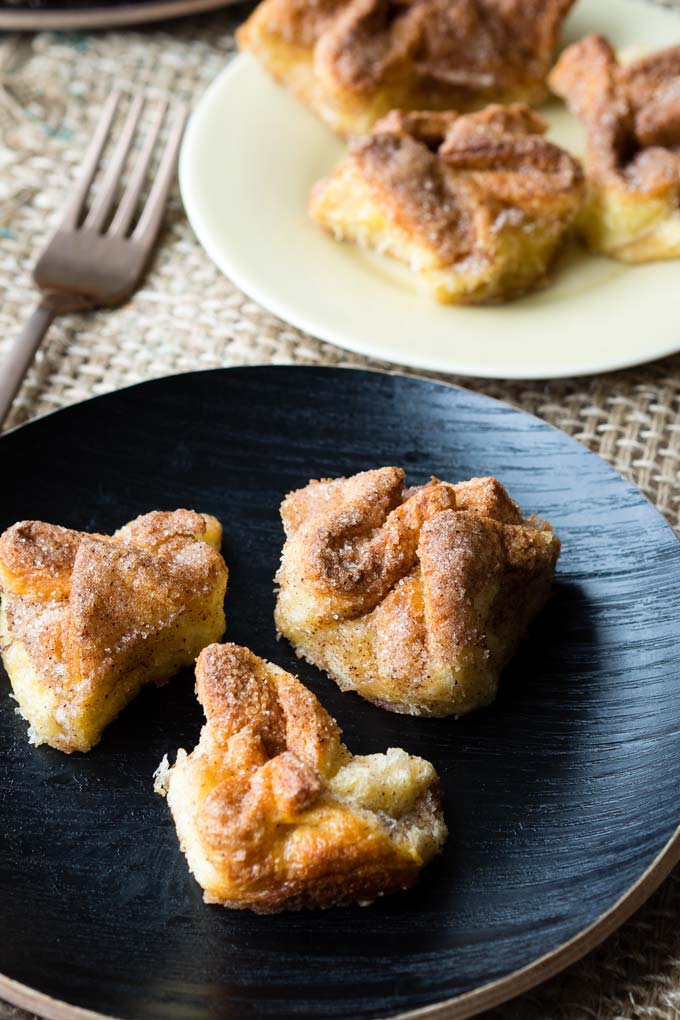 Are you a cinnamon addict too? Give these other cinnamon breakfast recipes a try! 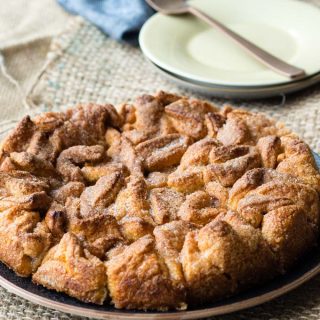 4.50 from 12 votes
Print Recipe Save RecipeSaved!
Serves: 8 people
Prep: 10 mins
Cook: 20 mins
Total: 30 mins
This Cinnamon Sugar Pull Apart Bread is made with crescent rolls, meaning you can get this in the oven in just 10 minutes or less! A quick and easy breakfast recipe if you love cinnamon and crescent rolls.