Easy and healthy Vegan Cinnamon Breakfast Muffins everyone loves! This egg free muffin recipe is made with brown sugar and lots of cinnamon, giving it a rich flavor and moist crumb.

We love cinnamon here. Why? Cinnamon has great flavor and it is a very healthy spice.

Cinnamon is linked to lowering blood sugar levels and reducing the risk of heart disease. So heck yes, we want to get our day started with healthy cinnamon muffins!

Look forward to breakfast when you have these Cinnamon Breakfast Muffins

So how do you make easy cinnamon muffins? Well for this recipe, there are two parts: the cinnamon breakfast muffin base and a quick cinnamon sugar crumb topping.

These muffins don't taste or look vegan. But, surprise! These healthy cinnamon muffins are egg free and made without dairy, so they're vegan.

Whether you're vegan or allergic to egg, or simply do not have any eggs in the fridge, the good news is that you can make no egg muffins.

Although egg is usually a key binding ingredient when it comes to baking, you won't be able to tell these are egg free muffins.

What can you use instead of egg?

Many egg free muffin recipes will use either banana, flax seeds, or chia seeds as the binding agent. You can develop recipes using any of these egg replacement options.

This particular egg free muffin recipe uses flax seed as a binding agent. There is a science to using flax seeds as an egg replacer. But the gist of it is that flax seeds have a goopy gel-like material. Grinding the seeds and mixing it with water draws it out.

It's commonly called a "flax egg", and it essentially has the same texture of a beaten egg. If you bake no egg muffins with flax seeds, you end up with that fluffy texture that all muffin lovers crave.

Tip: To best preserve nutrients, buy flaxseeds whole and grind it yourself. But for purposes of making flax egg, and for convenience, you can buy organic ground flaxseeds for a good price on Amazon.

Not only does this cinnamon breakfast muffin not require any eggs, it's also a fully vegan cinnamon muffin. This easy vegan muffin recipe uses coconut oil and oat milk (almond milk and soy milk also work fine) instead of dairy products.

Of course! This is a delicious cinnamon breakfast muffin recipe for vegans and non-vegans alike.

I know there's a stigma for a lot of people who immediately think something is going to taste bad if it's vegan. Well, these vegan breakfast muffins are here to convince you otherwise.

I've served this easy cinnamon muffin to many non-vegans, and no one ever suspects that it's egg free or vegan.

Here are a two other very delicious vegan muffins we love:

So I'm happy eating this healthy cinnamon muffin for my breakfast. And I also very gladly feed it to my toddler. The low sugar in this recipe makes it perfect for kids and toddlers, and as a healthy after school snack.

Can you use brown sugar in muffins?

Brown sugar works great in muffins! Don't let the fact that this healthy cinnamon muffin recipe only uses brown sugar throw you off.

Using brown sugar adds moisture in muffins because it contains molasses, unlike white sugar. It also adds a richness in the flavor that brings out the cinnamon spice in this brown sugar muffin recipe.

If you are ok with the darker color the brown sugar imparts in a muffin, it actually makes a whole lot of sense to use brown sugar in muffins.

How to make these easy brown sugar cinnamon muffins

It might all start sounding like it's getting complicated - baking cinnamon breakfast muffins without eggs, using only vegan ingredients, and using only brown sugar. But I assure you, these are easy cinnamon muffins.

You simply need to mix together all the dry ingredients, and then make a little well for all the wet ingredients including the flax egg. Then mix again until the batter is just mixed.

If it's your first time making easy vegan muffins, you may be a little surprised at how thick and gummy the batter might seem. But that's okay. It's just because of the lack of egg.

Then simply divide your batter into muffin cups, and sprinkle on your cinnamon sugar topping. At this point, you're basically done with the these brown sugar cinnamon muffins.

But the hardest part? Waiting for these Vegan Cinnamon Breakfast Muffins to bake for 16-18 minutes. To make time go faster, make yourself a mug of Vegan Bulletproof Coffee. 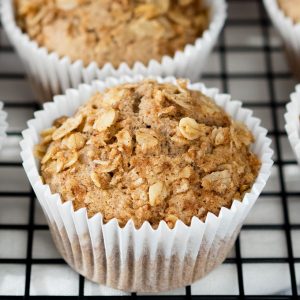 4.76 from 41 votes
Print Recipe Save RecipeSaved!
Serves: 12 muffins
Prep: 10 mins
Total: 26 mins
Easy and healthy Vegan Cinnamon Breakfast Muffins that everyone loves! This egg free muffin recipe is made with brown sugar and lots of cinnamon for a rich flavor and moist crumb.

If you love cinnamon (like me!) this is a great article on the benefits of Ceylon Cinnamon vs. Cassia Cinnamon. I always and only use ceylon cinnamon (true cinnamon) because I think it taste better, and more importantly, because cassia cinnamon is more risky to the liver. Unfortunately cassia cinnamon makes up about 90% of commercial cinnamon sold. I urge you to use organic Ceylon cinnamon if you plan on consuming cinnamon regularly. We easily buy it on Amazon. For the recipe, please note this is developed using Ceylon cinnamon, which is milder and sweeter in flavor.
Course: Breads and Muffins, Breakfast, Brunch
Cuisine: American
Keyword: Vegan Cinnamon Breakfast Muffins
Special Diet: Dairy Free, Vegan, Vegetarian
Author: The Worktop
Cal : 175kcal
Note: Nutrition information is a rough estimate.
Love this?I would appreciate a star review! Snap a picture and share it with me on Instagram using #theworktop and tagging me @theworktop.